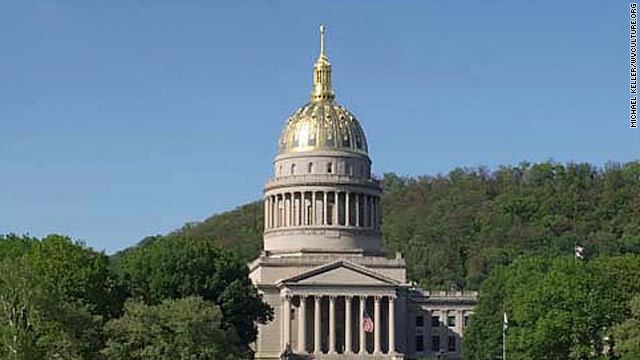 (CNN) - Voters head to the polls in West Virginia on Tuesday in a gubernatorial contest in which national Republicans are trying to tie the Democratic governor to President Barack Obama. And the contest is firmly in the national political spotlight, thanks to an infusion of big bucks that has fueled campaign ad wars over the past three weeks.

The acting governor, Earl Ray Tomblin, faces off against businessman Bill Maloney, the Republican nominee. Tomblin, the long-serving state Senate president, took over as governor last autumn after then-Gov. Joe Manchin, a fellow Democrat, was elected to fill the term of the late Sen. Robert Byrd. Besides Maloney and Tomblin, three independent or third-party candidates are on the ballot. The winner will fill out the final year of Manchin's gubernatorial term.

Late last week the Republican Governors Association went up with its final TV commercial of the campaign, which tries to tie Tomblin to the president, with the narrator saying that "A majority of America's governors are fighting in court to stop Obamacare, but Earl Ray Tomblin is implementing Obamacare in West Virginia. Obamacare will jack up taxes on businesses. Destroy jobs. Stop Obama. Stop Tomblin from implementing Obamacare."

Maloney is trying to frame the election as a campaign to defeat Obama, saying it "starts Tuesday, here in West Virginia."

In an interview with National Journal over the weekend, Tomblin appeared to be distancing himself from the president. "There are certain areas that I disagree with the president on completely, and I will continue to fight that even though he may be in my party," he said.

Tomblin's teaming up with another Democrat instead of the president.

In the final television commercial of his campaign, Tomblin went up last Wednesday on West Virginia airwaves with an ad that highlighted the support he's getting from Manchin, one of the most popular politicians in the state.

"Working together, we put our state's financial house in order," Manchin says in the ad, as he stands next to Tomblin.

The ad continues with Tomblin saying that since he took over as governor, he's continued to cut taxes and balance the budget. The commercial concludes with Manchin saying that "Earl Ray is the right man to keep West Virginia on the right course for a better future."

The ad wars in the contest have heated up in the past three weeks. Commercials from the Democratic Governors Association have characterized Maloney as an out-of-touch businessman in one spot, and a greedy businessman in another. The RGA fired back with ads describing Tomblin as a career politician and suggesting that he's used his years in the state legislature to benefit his family's greyhound breeding business

Tomblin won the major union endorsements, but just as important was the backing he received from the state Chamber of Commerce and the National Rifle Association, two groups that typically support GOP candidates.

Though Democrats greatly outnumber Republicans in the state, the race appeared to tighten as Election Day neared.

Because of the heating up of the ad wars, and because of the Democrats' loss last month in a well-publicized special congressional election in a district long dominated by the party, the contest in West Virginia is now firmly in the national political spotlight.

"This race had stalled out, but once Republicans brought Obama into the game, the race started to shift in their direction. Tomblin might still win, but there's no question that the president made his life more difficult," said Nathan Gonzales, political editor of the nonpartisan Rothenberg Political Report.

But Democrats shouldn't see it as a great victory for the party if Tomblin wins, Gonzales said.

"National Democrats shouldn't take much comfort in a Tomblin victory. Tomblin pulled together a coalition of the Chamber of Commerce, unions and the NRA in order to survive. There aren't many other Democrats that will be able to do that in 2012," Gonzales added.