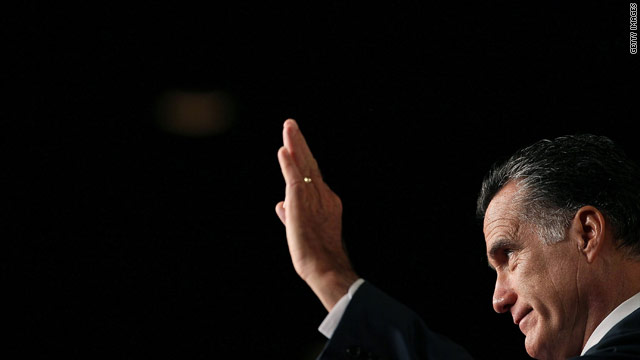 Romney said President Obama is "too heavy" on the nation's "shoulders" and criticized the president's leadership as "weighing down free enterprise."

Click to watch video
"There is only one person that has cut Medicare," said Romney, the frontrunner once again in national polls for the 2012 Republican nomination.

"That's the president for Obamacare."

And while vowing that "Social Security is not going to change for anyone" except two young audience members in the crowd, Romney took a swing at the longest-running governor of Texas, who he's recently surged past in national polls.

"One competitor thinks [Social Security is] a Ponzi scheme…I don't agree…I will fix it."

Perry and Romney continue to duke it out for the top position in 2012 horserace polls, but Perry's debate performances and views on immigration and Social Security have taken their toll on his numbers.

But Romney's main focus in Florida was on the president.

Romney hosted the townhall at The Villages, one of Florida's largest retirement communities–and a pit stop for presidential candidates on the campaign trail.

And Democratic National Committee chair Debbie Wasserman Schultz, who also represents the 20th Congressional District of Florida, was prepared for the Romney offensive.

In a conference call she offered up a rebuttal to Romney's remarks.

"Mitt Romney would carry the water for the Tea Party and would rather leave the 48 million elderly Americans across the country, including the 3.4 million in Florida, to fend for themselves in the private insurance market," she said.

"While President Obama has been focused on helping to rebuild the middle class, it's clear Republicans are still more concerned with protecting tax breaks for special interests and the wealthiest on the backs of seniors and the middle class."