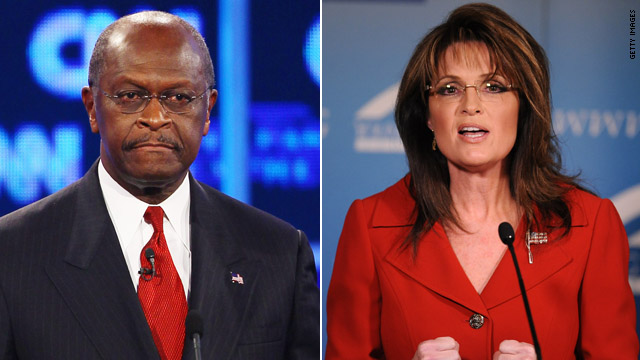 "The thing about Cain supporters is we build, and then we build, and we build," Cain said Wednesday at a book signing in Florida. "They don't defect. My supporters aren't going to run to the flavor of the week."

Palin previously knocked Cain's recent surge in the polls, casting him as the "flavor of the week" after he won a much-watched Florida straw poll nearly two weeks ago.

But this isn't the first time Cain, former CEO of Godfather's Pizza, showed his pique at Palin’s ice cream analogy.

In an appearance on "The Tonight Show with Jay Leno," Cain joked Friday that his "flavor" was Haagan-Daas Black Walnut.

"Substance, that's the difference. I got the substance," Cain told Leno. "I'm the Black Walnut. It lasts longer than a week."

Palin has said she's still considering a run but faces an Oct. 28 filing deadline for the first-in-the-nation primary in New Hampshire.