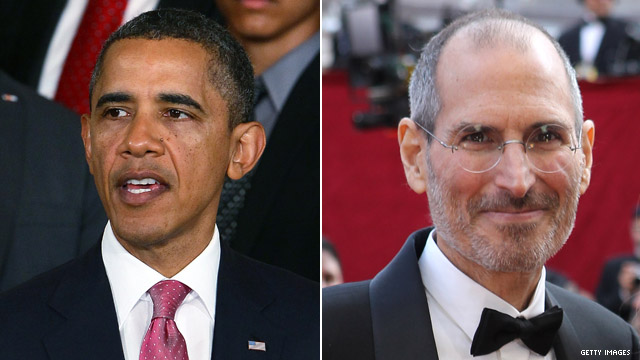 Washington (CNN) – President Barack Obama, who has enjoyed Apple's products along with millions of other Americans, Wednesday night hailed Steve Jobs as one of America's greatest innovators, a man "brave enough to think differently, bold enough to believe he could change the world, and talented enough to do it."

"The world has lost a visionary. And there may be no greater tribute to Steve's success than the fact that much of the world learned of his passing on a device he invented," the president said in a statement.

Praising his breadth and the impact of his work from personal computers to iPhones to movie production, the president added: "Steve was fond of saying that he lived every day like it was his last. Because he did, he transformed our lives, redefined entire industries, and achieved one of the rarest feats in human history: he changed the way each of sees the world."

This week Obama, known for his affection for the Blackberry, revealed he actually was a recipient of an advanced copy of the iPad 2 directly from Jobs.

"Steve Jobs actually gave it to me, a little bit early," he told ABC's George Stephanopoulos. "Yeah, it was cool. I got it directly from him."

In March of this year, CNN photographed the president holding an iPad.

The President and Jobs met several times, including at a dinner in San Francisco in February with Silicon Valley executives and last year when they discussed issues revolving around technology and the economy.

Many politicians also praised Jobs as the truest example of the American dream, an icon.

House Majority Leader Eric Cantor, R-Virginia, tweeted "There is not a day that goes by, and often not an hour, that a Steve Jobs invention does not better my family's life. Thank you Steve."

Fellow Californian and House Minority Leader Nancy Pelosi called Jobs "a visionary who changed the way we live, an innovator whose products brought joy to millions, a risktaker who wasn't afraid to challenge the status quo" and also said in a statement "his sage advice was respected by policymakers on both sides of the aisle. His courageous fight against cancer brought strength to many."