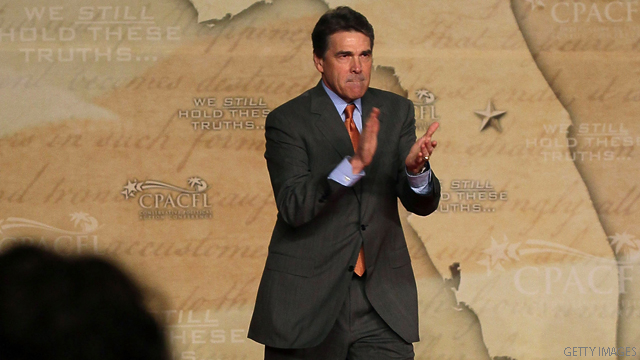 Perry's presidential campaign announced Wednesday morning that he also has $15 million cash on hand, as of Sept. 30, the end of the third quarter of fundraising.

Perry announced his run for the White House on Aug. 13, half way into the third quarter. His campaign said the vast majority of the money raised by Perry is for use in the primaries and caucuses, with just $50,000 of the funds designated for general election use.

Team Perry said they received donations from all 50 states, the District of Columbia, Puerto Rico and Guam, with 51 percent of the donors hailing from outside Texas.

"The generous contributions from Americans across the nation prove the overwhelming support for Gov. Perry's principled, conservative leadership and vision to get America working again," Perry Campaign Manager Rob Johnson said in a statement.

Former Massachusetts Gov. Mitt Romney will report raising between $11 and $13 million over the last three months, according to a source familiar with the tally. That total is less than the $18.2 million Romney collected during the previous fundraising quarter. Romney spokeswoman Gail Gitcho would not confirm the total but said a downturn in fundraising is normal during the course of a campaign.

Friday was the deadline for the third fundraising quarter of 2011, but campaigns are not required to report their totals until Oct. 15.

The quarterly totals will be watched for signs of each campaign's financial strength, but no report will be as closely scrutinized as Perry's.

Perry quickly shot to the top of national polls after his late entrance into the race, but has dropped in those surveys in the past week after two uneven debate performances and criticism by the other campaigns over his stance on illegal immigration and Social Security.

Perry is one of the most prolific GOP fundraisers in the country, but federal finance laws are stricter than those in Texas.