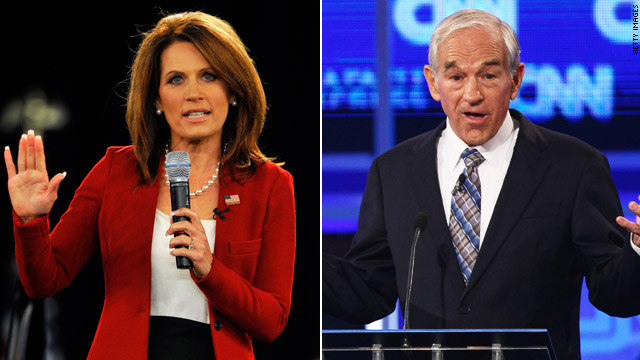 Washington (CNN) – Rep. Michele Bachmann did not cast any votes in September and has missed all five votes in October, a byproduct of her bid for the GOP presidential nomination. Since announcing her campaign on June 13, Bachmann has voted 54 percent of the time.

Comparably, since announcing his candidacy on May 13, Texas Rep. Ron Paul has voted 84 percent of the time, according to numbers compiled by Congressional Quarterly.

Paul announced earlier this year that he would retire from the House in 2012, something Bachmann has not done. While she said she won't run for re-election to her seat while also running for president, Bachmann hasn't ruled out a House re-election bid should her presidential campaign end early in the primary season.

Bachmann’s congressional spokesperson told Minnesota Public Broadcasting, the first organization to report this story, that “by continuing to lead the fight against the president's job-destroying policies, Congresswoman Bachmann is serving not only her constituents, but countless more Americans."

It is not uncommon for presidential hopefuls who come from the Senate or House to miss votes.

According to data from the U.S. Congress Votes Database, then Illinois Senator Barack Obama missed nearly 80% of all votes in September and October 2007, compared to the 68% of all votes missed by Arizona Sen. John McCain during the same time frame.

Republican Rep. Thaddeus McCotter of Michigan boasted the best attendance record of House members who ran for the GOP nomination. Before he ended his presidential bid on September 22 of this year, McCotter had voted 86 percent of the time.

Presidential hopeful and Texas Gov. Rick Perry is the only contender other than Bachmann or Paul that currently holds elected office. Though legislation that is sent to the governor can be signed anywhere, Perry canceled campaign events in South Carolina and returned to Texas when his state was dealing with wildfires.