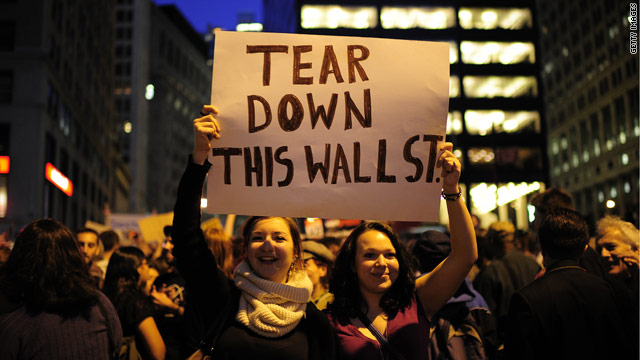 (CNN) – Democrats decided to strike while the iron is hot Thursday and released a new web video that blasts Republican presidential candidates for railing against Wall Street reform.

On the same day the "Occupy Wall Street" protests are expected to embark on Capitol Hill, the Democratic National Committee released the web ad featuring clips of 2012 candidates pledging to repeal the Dodd-Frank bill in an attempt to leverage anger at Wall Street and direct it toward Republicans.

"Three years ago Wall Street risk taking almost destroyed our economy," the ad reads as it introduces clips of news coverage from the 2008 financial meltdown.

Touting the Dodd-Frank bill as legislation signed by Obama to "prevent that from ever happening again," the ad goes on to say "Republican presidential candidates want to undo all that progress."

It also paints Senate Republicans as obstacles to reform, citing resistance to the confirmation of Richard Cordray as the head of the newly created Consumer Protection Financial Bureau.

Republicans have criticized the agency as lacking in transparency.

"Occupy Wall Street" protesters have drawn the support of labor unions as they voice discontent with the economy and other issues in the financial district of New York City. But Thursday, demonstrators will gather on Capitol Hill under the same name.

Former CEO of Godfather's Pizza and presidential, Herman Cain, who's been moving up in the polls, said Wednesday he didn't understand what the protesters want and suggested their anger is misplaced.

"Don't blame Wall Street. Don't blame the big banks. If you don't have a job and you're not rich, blame yourself," Cain said.