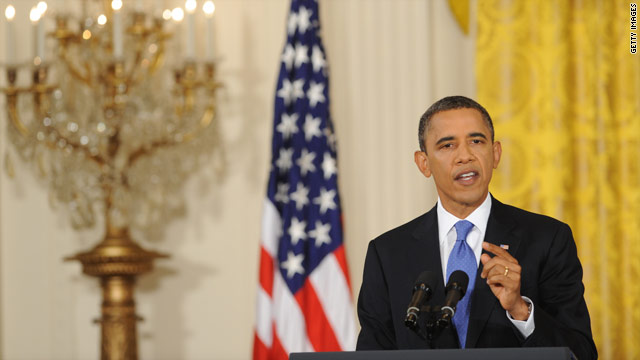 (CNN) - President Barack Obama held a press conference on the economy and jobs Thursday. Read the full live blog below.

12:12 p.m. ET –Obama: My intention is to insist that each part of this, I want an explanation as to why we shouldn't be doing it. I would love nothing more than to see Congress act so aggressively that I can't campaign against them as having done nothing.

12:10 p.m. ET - Obama says a lot of the debt that built up prior to 2008 caused us to live on borrowed time because the underlying foundations weren't as strong as they needed to be.

12:07 p.m. ET - President says it is very difficult for dozens of European parliaments to agree on a debt package because their politics are different.

12:05 p.m. ET –Obama: The actions we took after the financial disaster helped to strengthen our economy in ways other countries did not do.

12:04 p.m. ET - Obama: The slowdown that we're seeing is not just happening in the United States, it is happening everywhere.

12:04 p.m. ET - Question: What should European leaders do to resolve debt crisis, and how could it affect the U.S.? Do you feel that the European leaders have been negligent in pushing austerity too soon?

12:03 p.m. ET - Obama says there's no doubt the Pakistani spy agency has some connections with terror groups and we will constantly evaluate our relationship with Pakistan.

12:02 p.m. ET - Obama: It is in Pakistan's interest to have a stable and independent Afghanistan.

12:00 p.m. ET - Obama says Pakistan has been a great partner on a whole range of issues but Pakistan has hedged their bets on Afghanistan by interacting with unsavory characters.

11:59 a.m. ET - President says we have done an outstanding job of going after al Qaeda in the border region between Pakistan and Afghanistan. We would not have been as successful there without the help of Pakistan.

11:54 a.m. ET - President says we've been seeing a remarkable transformation in China over the last few decades...but what is also true is China has been very aggressive at gaming trad to its advantage and the disadvantage of other nations–I've said it publicly and privately to them–one example of that is currency manipulation. It makes our exports from them more expensive and our imports from them cheaper. We've seen slight improvement, slight appreciation, over the last year, but it's not enough.

11:54 a.m. ET - Question from Matt Spetalnick, Reuters: What's your position on the Senate bill to address Chinese currency manipulation? Would you veto it or sign it should it pass? Do you agree with Adm. Mullen's accusation that the Pakistani intelligence agency has used the Haqqani network as a virtual arm, and what if any consequences would you be willing to consider?

11:53 a.m. ET - Obama: I'm also dealing with a Republican leader who says his only job is to beat me–not help get jobs for the American people–but to beat me...and he's been saying that for some time now.

11:53 a.m. ET - Obama: So far Republicans haven't been responsive–not only to me–but also to public opinion.

11:51 a.m. ET - Obama says the people Republicans want to protect, the millionaires and billionaires, would do better if middle class folks could get some more money in their pockets.

11:49 a.m. ET - Obama: If Congress does something I can't run against a do-nothing Congress.

11:49 a.m. ET - Obama gives a "homework assignment": Ask Republicans what their plan is and have it assessed by the same independent economists that have assessed our jobs plan.

11:47 a.m. ET - Obama: The response from Republicans has been no. And they haven't given a reason why.

11:45 a.m. ET –Obama: I am always open to negotiations, what is also true is they need to do something. I think it is very clear that if members of Congress come in and say we want to build infrastructure, here's what we want to do...I am ready, eager to work with them. But that's not what we're hearing. What we're hearing is their big ideas, the ones that make sense, are ones we're already doing.

11:45 a.m. ET - Question from Bill Plante, CBS News: Are you negotiating with Congress or simply campaigning against them?

11:44 a.m. ET - Obama says there will always be a debate about what will be successful and Department of Energy based their decisions on what would make sense. For every success there might be one that doesn't work out as well.

11:40 a.m. ET - Obama says what's been true historically is that businesses that rely on new technologies–it's going to take awhile before they get takeoff. There are a lot of up-front investments that have to be made...clean energy companies are competing against traditional energy companies and traditional energy is cheaper but it's running out and causes pollution. And other countries are subsidizing these companies much more aggressively than we are, partly because they're projecting (how important they will be in the future).

11:40 a.m. ET - Question from David Nakamura, Washington Post: Why has the green industry been so slow to respond to the assistance your administration has provided?

11:37 a.m. ET–Obama: I was trying to make a broader point which is that people have been using financial regulation as an excuse to charge customers more. They have that right, but it's not necessarily a fair practice.

11:37 a.m. ET - Question from Hans Nichols, Bloomberg News: How do you plan on stopping banks from implementing new fees and do you believe your administration has a right to dictate how much profit corporations make?

11:36 a.m. ET –Obama: I'm not going to cave to the competition when they're heavily subsidizing these companies.

11:32 a.m. ET - On Solyndra: We've got to dominate cutting edge technologies and manufacturing. Part of what's happening is other countries are putting enormous subsidies in these companies to get them started overseas. We knew from the start the loan guarantee program was going to involve some risk. The overall portfolio has been successful. There are going to be some companies that did not work out. Solyndra was one of them...but I have confidence the decision were made based on what would be good for the American economy and getting people back to work.

11:32 a.m. ET - Obama: I've got complete confidence in our ability to find out who made that decision and why it was made.

11:28 a.m. ET - Obama says one of the biggest problems is a lot of that stuff wasn't exactly illegal but it was immoral and that's why we needed to pass Dodd-Frank. The financial sector is always looking for ways to make money, that's their job...if there's a loophole to be found they'll take advantage of it.

11:28 a.m. ET - Question from Jake Tapper, ABC News: You administration hasn't been very aggressive in prosecuting Wall St. executives for malfeasance, why is that? In light of the Fast and Furious and Solyndra scandals, are you worried at all how your administration is reacting?

11:26 a.m. ET- Obama: That does not make sense to the American people and they are frustrated by it. I'm going to be fighting every step of the way (to make sure agency is successful).

11:25 a.m. ET - President discusses vote on Richard Cordray to head Consumer Protection Financial Bureau and resistance on the part of Republicans to confirm him.

11:22 a.m. ET- Obama: It's giving voice to a more broadbased frustration at how our financial system works.

11:21 a.m. ET- Obama: I've heard of it, I've seen it on television. I think it expresses the frustration that the American people feel...you're still seeing some of the same folks who acted irresponsibly trying to fight methods to keep (financial meltdown) from happening again.

11:21 a.m. ET–Question from Jackie Calmes, New York Times: Are you following the Occupy Wall St. movement that began in New York City has spread to other cities and what are your reactions to it?

11:21 a.m. ET - Obama: Even ideas that used to be supported by Republicans, if I propose them, suddenly they're against them.

11:20 a.m. ET - President says this is a good opportunity for Americans to see that Congress has the ability to come together and act. There may be skepticism that he personally can persuade Republicans, but that's why he needs the American people to put the pressure on them.

11:19 a.m. ET- Obama: We can afford this bill without affecting our deficit. Our proposal is paid for, so that can't be the excuse.

11:16 a.m. ET - President says Americans are receptive to the jobs bill but frustrated with Congress.

11:15 a.m. ET- Obama: We put forward what we thought was a solid effort to pay for the jobs bill.

11:15 a.m. ET - Question from NBC's Chuck Todd: Do you support Sen. Reid's proposal for a Millionaire's surtax? During the debt ceiling debate you asked the American people to call members of Congress and switchboards got jammed. This time there's not the same reaction. Are you worried about your own powers of persuasion?

11:13 a.m. ET–Obama: If we don't take action we could end up having more significant problems than we have right now. Some of it is simple math

11:11 a.m. ET - Obama: If Republicans are opposed to this bill they need to explain why they're opposed and what would they do? I haven't heard them offer a plan that would offer a similar impact and that's what we need right now.

11:10 a.m. ET - Obama says The greatest source of unemployment has been layoffs.

11:08 a.m. ET - Obama: What we've seen is games playing, a preference to score political points rather than actually get something done (for the past two years). Our doors are open.

11:07 a.m. ET - Question from Ben Feller, Associated Press: Do you agree with Ben Bernanke that the economic recovery is close to faltering? And wouldn't it be more productive to work with Republicans on a bill that could pass?

11:06 a.m. ET- Obama: With respect to the economy, there is no doubt that growth has slowed. He cites Japanese tsunami and Arab spring, calls debt ceiling debacle "completely unnecessary game playing."

11:04 a.m. ET - Obama: The proposals in this bill are not just random investments, they are steps we need to take if we want this economy to last.

11:02 a.m. ET- Obama: It has funding to prevent more people from losing their jobs.

11:00a.m. ET- President Barack Obama: If we don't act, there will be fewer jobs, there will be weaker growth...if we look to next week, any Senator that looks at voting against the jobs bill needs to explain why.