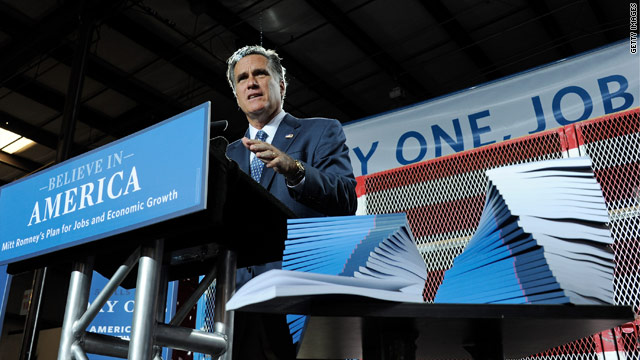 According to a Quinnipiac University poll, 49% of registered voters believe Romney, the former governor of Massachusetts, would handle the economy better than the president. Thirty-nine percent of respondents said Obama would do a better job.

The poll indicates that if it's between Texas Gov. Rick Perry and the president results are much closer. Forty-five percent of respondents favor Perry on the economy while 42% prefer Obama. The three-point margin is within the sampling error of the survey.

The numbers are getting worse for Obama, though. When the same question was asked last month, Obama polled only 4% behind Romney and led Perry by 2%.

"The president is stuck at a politically unhealthy level for someone who wants to be re- elected," said Peter A. Brown, assistant director of the Quinnipiac University Polling Institute. "His standing with the American people is obviously closely related to their views of the economy."

When registered independents are asked the same question Romey outpaces Obama by 13%, according to the same Quinnipiac poll. But Perry and Obama are only 4% apart in that category, once again within the sampling error.

Even though voters see Romney and Perry as better stewards of the economy, a majority still blame former President George W. Bush for the country's economic woes. According to the poll, 51% of respondents blame Bush, compared to 32% that who blame Obama.

This number is relatively unchanged since September, when 53% blamed Bush and 32% blamed Obama.

"The political challenge for the president will be whether he can make voters believe his eventual GOP opponent is a carbon copy of the former president," said Brown. "The fact that voters are unsure whether the economy will improve if he is re-elected is not a good sign for Obama."

Quinnipiac University conducted the poll of 2,188 registered voters from September 27 to October 3. The poll was conducted by phone and has a sampling error of plus or minus 2.1 percent.