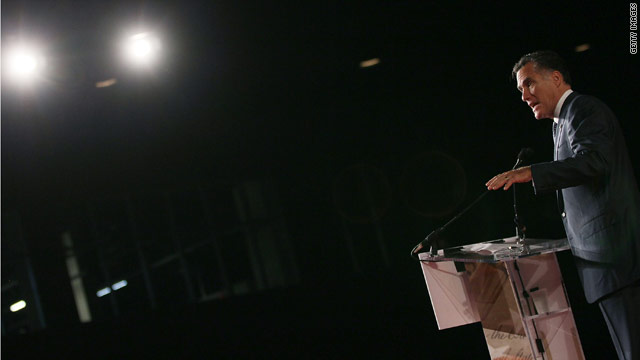 Romney's vision for 'an American century'

Charleston, South Carolina (CNN) – One day after President Barack Obama referred to the jobs crisis in America as "an emergency", GOP presidential candidate Mitt Romney will deliver his first major foreign policy speech, sharply criticizing the president while laying out his own vision for what he calls "An American Century" including calling for increased military spending.

In an advance draft of his planned remarks he'll deliver before cadets at The Citadel in Charleston, Romney is expected to lay out his vision that combines economic and military strength, noting that "God did not create this country to be a nation of followers."

Claiming America's standing in the world and the economy have "been weakened" by the Obama administration, Romney is expected to call for more military spending.

The former governor of Massachusetts will lay out eight foreign policy-related actions he would implement in his first 100 days as president, including expanding the United States warship fleet, consolidating Middle East policy into the office of a regional director, and creating economic opportunity in Latin America through a "robust public-diplomacy and trade promotion campaign."

Romney will also reinforce that the U.S. has a special responsibility to allies such as Israel, the United Kingdom and Mexico.

On Thursday, Romney announced his foreign policy advisers, many of whom are drawn from the Bush's administration including former Secretary of Homeland Security Michael Chertoff, Jim Wilkinson, Meghan O'Sullivan and Dan Senor.

While Romney has previously called for America to withdraw from Afghanistan, Democrats were quick to criticize his new national security team as the group responsible for U.S. involvement in Iraq and Afghanistan in the first place.

Romney will also say an early administration priority will be to review the need for a continued U.S. presence in Afghanistan, with an emphasis of consulting generals on the ground.