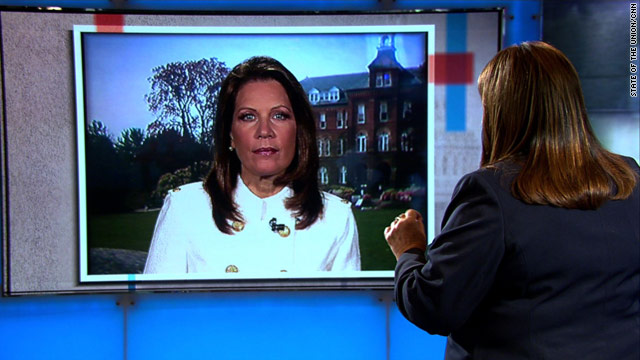 (CNN) - Minnesota Rep. Michele Bachmann dismissed the notion that her campaign was in trouble Sunday, saying she was still very much in the running to become the 2012 GOP presidential nominee.

“I think we are doing a good job getting our message out on job growth and on turning the economy around,” Bachmann said on CNN’s “State of the Union.” “That's what we're working on. We're not focusing on the day-to-day. Because as you have seen with many of the other candidates, candidates go up, candidates go down and what we're very concerned about is making sure that the message gets out there, because it is not about any one of us, it is about turning the economy around and creating jobs.”

When presented with poll numbers that show her sliding among the GOP candidates, Bachmann said she wasn’t disheartened.

“We're just starting a kick-off today of four days here in New Hampshire and we've got a wonderful experience in Iowa and we've been in South Carolina, Florida, we've worked very hard and we have very strong numbers in those states and we're looking forward to continuing that,” Bachmann said.

She played down a recent loss in a closely-watched Florida straw poll, saying her campaign had chosen not to partake in that event.

“We did not participate in the Florida straw poll,” Bachmann said. “We didn't participate at all so the ranking is completely inaccurate.”

Bachmann said her performance in the Iowa Straw Poll – which was held August 13 – were the indication of her standing in the race.

“That poll is the only poll of all the ones that you've mentioned where anyone in the state can participate,” she said. “It's the most reflective of an actual primary election or caucus and that's why we were excited to win that poll.”