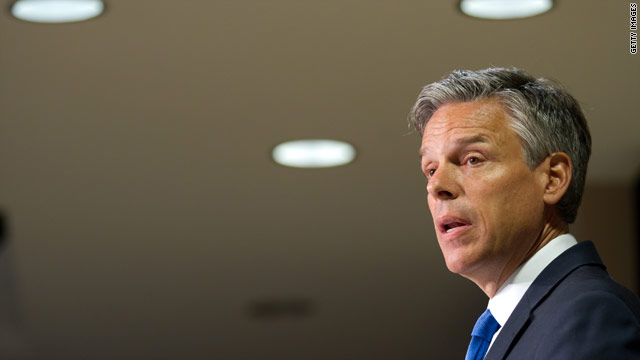 (CNN) - On the same day Jon Huntsman gave his foreign policy speech in New Hampshire, the former Utah governor took a swipe at his GOP presidential opponent Mitt Romney, who made a similar speech on Friday.

"I'm offering solutions. He is throwing out soundbites," Huntsman said Monday on CNN's "The Situation Room with Wolf Blitzer." "At the end of the day, you have to manage U.S. affairs in the world."

In his speech, Huntsman, also a former U.S. ambassador to China, called on the government to dial back its military efforts overseas.

His remarks offered a stark contrast to Romney's foreign policy approach that calls for an increase in military spending, including an expansion of the U.S. warship fleet.

Huntsman also said Romney's sentiments toward Russia and China-which Romney described as "rising nations with hidden and emerging aspirations" in his speech-was a method "that plays on fear factor."

"We need to begin aligning friends and allies around those two necessities, and realities that will drive our foreign policy are defense spending and the way we deploy well into the 21st century," Huntsman said. "Much different vision than what Romney put on the table."

Both Romney and Huntsman have persistently courted voters in New Hampshire, which holds the first-in-the-nation primary.

But according to a Harvard University/Saint Anselm College Poll released Monday, Huntsman trails Romney by a wide margin: Romney polled with 38%, while Huntsman came in with 4%.