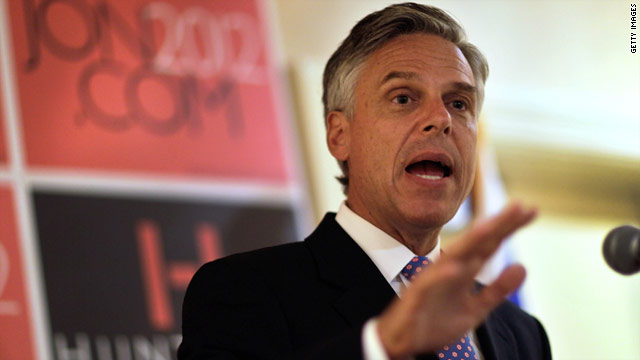 Huntsman: Pastor is a 'moron'

(CNN) - GOP presidential hopeful and Mormon Jon Huntsman had some choice words on Monday for the Dallas pastor who's repeatedly described Mormonism as a "cult" and a "false religion" this weekend.

"The fact that, you know, some moron can stand up and make a comment like that, you know, first of all, it's outrageous," Huntsman said on "The Situation Room with Wolf Blitzer." "Second of all, the fact that we are spending so much time discussing it makes it even worse."

Robert Jeffress, senior pastor at First Baptist Dallas, ignited a debate this weekend over the relationship between faith and politics when he argued that Christians should vote for other Christians.

In his remarks, Jeffress discouraged Republicans from voting for Romney, a Mormon, because of his "non-Christian" beliefs.

On Monday, Huntsman, former Utah governor and U.S. Ambassador to China, called on fellow Republican candidate Rick Perry, to cut off ties with Jeffress. The Baptist minister has been a vocal supporter of the Texas governor, in part, because of his Christian faith.

"Make an immediate and decisive break, period," Huntsman said, referring to Perry. "This kind of talk, I think, has no home in American politics these days. You know, anyone who has associated with someone willing to make those comments ought to stand up and distance themselves in very bold language and that hasn't been done. And Rick ought to stand up and do that."

While Perry has largely avoided questions on the subject, he told reporters in Iowa on Friday that he doesn't think Mormonism is a cult.