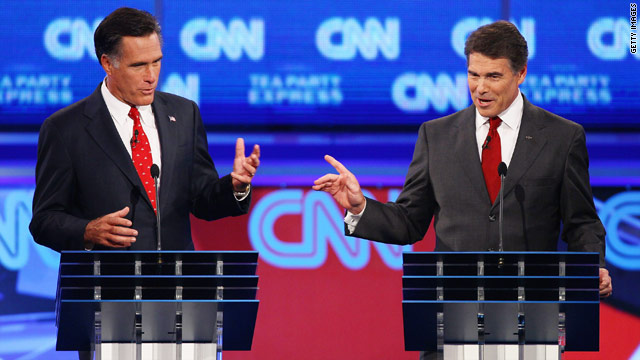 Lebanon, New Hampshire (CNN) - Former Massachusetts Gov. Mitt Romney called on Texas Gov. Rick Perry to repudiate comments about Mormonism made by Rev. Robert Jeffress, escalating an intraparty squabble hours before the candidates were to meet at a GOP debate.

Taking press questions for the first time since the news broke, Romney was asked Tuesday to respond to remarks by the pastor, a Southern Baptist leader who recently called Mormonism a "cult" and said he believes voters should choose Rick Perry over Mitt Romney, because Romney is a Mormon, and Mormons are "not Christians."

Jeffress made the remarks to reporters Friday after introducing Rick Perry at the Values Voter Summit in Washington. He also endorsed Perry on the same day.

Since the comments, Romney, a Mormon, has worked to keep his message on jobs and the economy. But on Tuesday he said that by not speaking out Perry had effectively condoned Pastor Jeffress' comments and called for Perry to repudiate the pastor.

"Governor Perry selected an individual to introduce him who then used religion as a basis for which he said he would endorse Governor Perry and a reason to not support me. Governor Perry then said that introduction just hit it out of the park," Romney said. "I just don't believe that that kind of divisiveness based on religion has a place in this country."

Conference organizers on Friday said they had selected Jeffress as the introductory speaker to Perry but that Perry's campaign had been notified approximately two weeks prior and had raised no objection.

In his introduction to Perry at the summit, Jeffress called the Texas governor a genuine follower of Jesus Christ, unlike another candidate he did not name in his speech. In a later interview with CNN's Jim Acosta, Jeffress urged voters to elect a "competent Christian" rather than a "competent non-Christian like Mitt Romney."

And his campaign released a statement Tuesday in response to Romney's comments vowing Perry would keep his focus on jobs and the economy.

"Mitt Romney's comments are a distraction from the fact that Romneycare served as a blueprint for Obamacare," the campaign said.