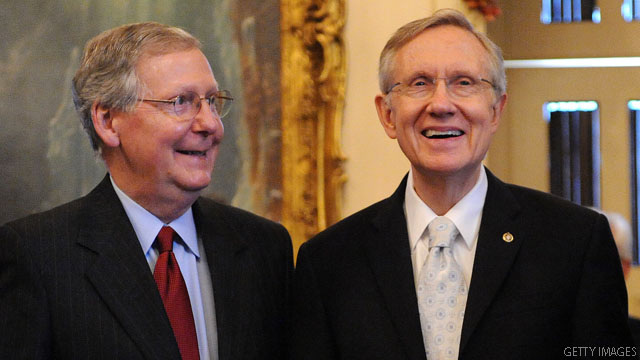 In the latest example of partisan rancor in Congress, Don Stewart broke down Reid's article and inserted his own editorial context.

Sen. Reid's article titled, "Trying to restore Senate comity" criticized Senate Republicans for preventing the passage of "job-creating" legislation and abusing the rules of the chamber. Sen. McConnell's rebuttal, which came in the form of red type, touted legislation passed since Congress returned from the August recess and pushed back against Reid's claims that Republican-backed amendments are proposed to score political points.

An example of one such paragraph, written by Reid, D-Nevada, shows the edits from McConnell's office in parentheses.

"None of the amendments Republicans demanded were about policy [Again, one was on Chinese currency, one was the President's stimulus bill, and the other five were all about job creation]. Each was an attempt to score political points or provide fodder for campaign ads. None was related to the legislation on the floor [The Hatch amendment was directly related, the rest were jobs amendments, and Sen. Reid agreed to vote on all but one], which would support 1.6 million American jobs. None would put a single American back to work [Wow, strange thing to say about the President's stimulus bill that he introduced]. Yet still we tried to reach a compromise with our Republican colleagues."

When asked for a response to the McConnell, R-Kentucky, edits, a Senate Democratic leadership aide told CNN it "sounds like we really got under his skin."

The Senate floor has served as a ring for similar debates across the aisle as the Democratic-controlled Senate is expected to take up President Barack Obama's $457 billion jobs bill this week, with a procedural vote on the measure Tuesday.

Democrats and Republicans are largely divided over the package and specifically over tax increases on those with annual incomes over $1 million per year.

- CNN's Ted Barrett and Gabriella Schwarz contributed to this report.