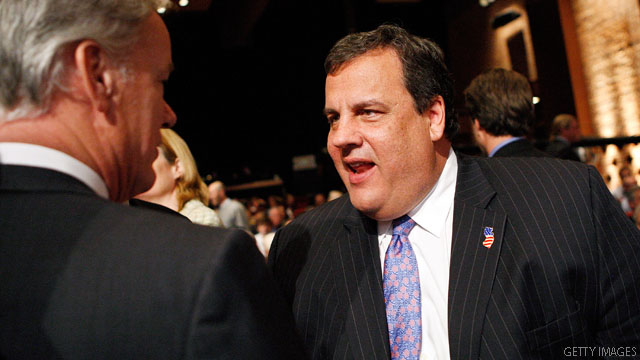 (CNN) - It seems New Jersey Gov. Chris Christie's decision not to run for the Republican presidential nomination is paying political dividends back home in the Garden State.

Two new polls released Wednesday morning indicate that Christie's approval in New Jersey is on the rise. And according to one of the surveys, New Jersey voters back Christie's decision not to launch a White House bid by an eight to one margin.

A Quinnipiac University poll shows that Christie has a 58% approval rating among New Jersey voters, his best score ever in Quinnipiac surveys, with 38% saying they disapprove of the job the outspoken first-term GOP governor is doing. That's up from a 47%-46% approval rating in August, and the poll indicates that a 25-point surge in approval among women voters is behind the jump in Christie's numbers.

Eighty-four percent of those questioned say Christie made the "right decision" last week not to run for the White House, with just one in ten saying he made the wrong call. But two-thirds of voters, including three-quarters of Republicans, say it's "very likely" or "somewhat likely" that Christie would have won the GOP nomination had he launched a campaign.

"Overwhelmingly, his New Jersey neighbors thought Gov. Christopher Christie did the right thing in walking away from the presidential race – even though most voters think he could have won both the nomination and the White House," said Maurice Carroll, director of the Quinnipiac University Polling Institute.

"They think the governor's brief run as Republican flavor-of-the-week was good for New Jersey, and most aren't bothered by his out-of-state travels," added Carroll. "And there's nothing like some national attention to get the folks back home to appreciate you a little more. We don't know if it's cause and effect, but Christie's approval rating, especially among women, is way up."

Christie's also at a new high in a new Monmouth University/NJ Press Media Poll, with 55% of registered New Jersey voters giving him a thumbs up and 37% saying they disapprove of the job he's doing as governor. A jump in support by female voters is contributing to the overall rise in his approval rating.

Christie made his announcement last week at a news conference at the state capital.

"Now is not my time. I have a commitment to New Jersey that I simply will not abandon," Christie said. "That's the promise I made to the people of this state when I took office."

The Monmouth University/NJ Press Media Poll was conducted between Oct. 5 and Oct. 9, with 817 New Jersey adults questioned by telephone. The survey's overall sampling error is plus or minus 3.4 percentage points.

The Quinnipiac University poll was conducted between Oct. 5 and Oct. 10, with 1,186 New Jersey registered voters questioned by telephone. The survey's overall sampling error is plus or minus 2.9 percentage points.