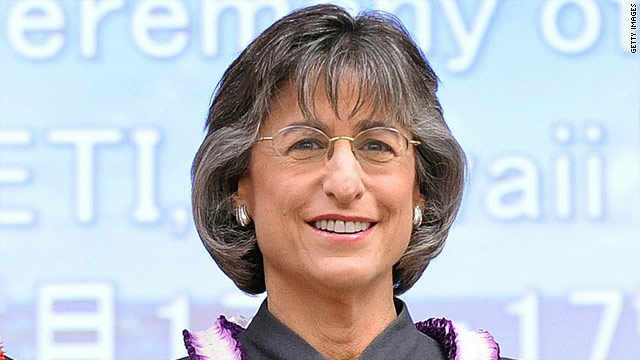 (CNN) - Former Hawaii Gov. Linda Lingle joined the race for the U.S. Senate Tuesday on the GOP side, a race that already counts former state senator John Carroll, who will face Lingle in the Republican primary, as well as Rep. Mazie Hirono, and former Rep. Ed Case, both Democrats.

The two-term former governor announced her bid on local radio in Hawaii.

Lingle, who also served as mayor of Maui has joined the ranks of those competing in the first open race for one of Hawaii's Senate seats in twenty years. Democratic Sen. Daniel Inouye was elected in 1962 and is serving his 9th term. Sen. Daniel Akaka, also a Democrat, will retire at the end of his third full term in 2012. He was appointed in 1990 after the death of Sen. Spark Matsunaga –yet another Democrat.

If a Republican wins the Senate race in Hawaii, it would be the first since Hiram Fong was elected in 1969. And the win would add a well-needed victory for the GOP as they attempt to capture a majority in the chamber. Democrats currently outnumber Republicans in the Senate 53-47, including two independents who often caucus with the Dems. Republicans need a net pickup of 3-4 seats, but that may be a tough battle in the home state of President Barack Obama.

Lingle cited "gridlock" as a central reason she chose to enter the race.

"As a Republican in Hawaii I've had to work across party lines to get things done," she said, before dropping the names of her "friends" in the Senate to drive the point of her bipartisan chops home.

But she also counts former Alaska Gov. Sarah Palin as a friend –Lingle introduced her at the Republican National Convention where Palin accepted the 2008 GOP vice presidential nomination - a fact that Democrats will use against Lingle during her campaign.

In a pre-emptive rebuttal on how she'd serve if elected, she declared "I want to be real clear on this point: I don't work for Mitch McConnell and for that matter I don't work for President Obama, I work for the people of Hawaii - if there's a law being proposed, if its good for Hawaii I'm for it, if it's not good for us, I'm against it regardless of who introduced it."

And one day later, the Democratic Senatorial Campaign Committee's Communications Director Matt Canter weighed in on the prospects for a Lingle win.

"Hawaii can't afford a Republican like Linda Lingle in the Senate who will oppose President Obama and who won't stand up to her own party's attacks on seniors, Medicare, and the middle class," Canter said.