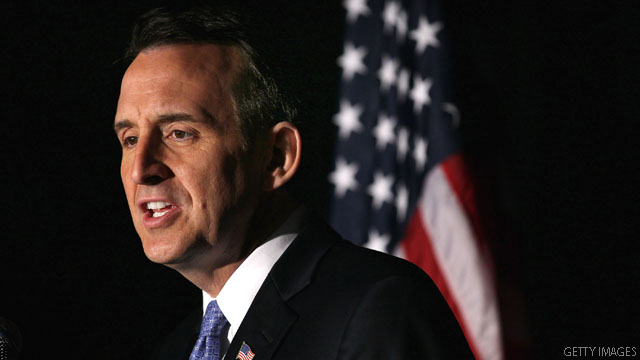 Pawlenty says he has regrets

(CNN) - Former GOP presidential candidate Tim Pawlenty praised the gift of hindsight, saying he's realized some mistakes he made in his bid for the Oval Office.

After placing third in the much-watched Ames, Iowa, straw poll in August, the former two-term Minnesota governor made a surprising move when he abruptly called it quits the following day.

But while he had misgivings about his campaign, Pawlenty denied that he regretted ending his presidential bid when he did.

"In terms of the timing of dropping out of the race, we took it as far as we could with the resources we had and we just couldn't take it any further," Pawlenty said, adding that his campaign spent too much money, too early.

"You have to raise a lot of money to be successful, and at that point at Ames, our finances had basically run dry," Pawlenty said.

Pawlenty also said he regrets trying to morph into a candidate that met the expectations of the political universe.

"You get all these people telling you what to do, and in the end, I think you're just better served as a candidate and I think the campaign is better served if you just be yourself," Pawlenty said.

After leaving the campaign trail, Pawlenty endorsed current front-runner Mitt Romney, saying the former Massachusetts governor was the most electable of the current GOP presidential field.

With few media appearances, Pawlenty has maintained a low-profile since making his exit, but he jumped back into the spotlight this week when his official governor's portrait was unveiled at the state capitol Monday.

Pawlenty said he's now looking for a job in the private sector.