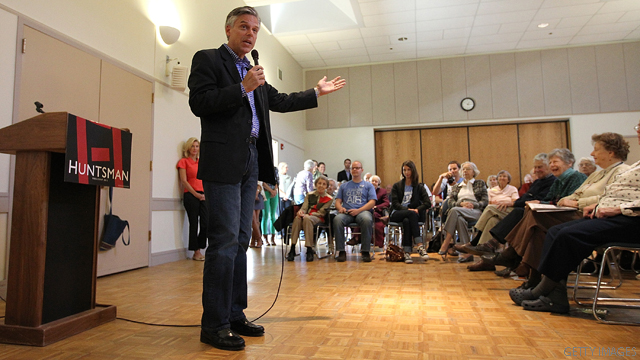 Portsmouth, New Hampshire (CNN) - Candidates for the GOP presidential nomination are split on whether to boycott the Nevada caucus, with some contenders saying they will not compete in that state because the date of their caucus will push the New Hampshire primary up to this December.

Nevada's GOP contributed to disarray in the Republican primary calendar when it moved up the date of the state's caucus to January 14. The move could push New Hampshire's primary up into early- or mid-December, Secretary of State Bill Gardner said in a letter posted to his website Wednesday.

Former Utah Gov. Jon Huntsman announced early Thursday he was boycotting the Nevada caucus unless it pushes back its voting date. Later in the day, former House Speaker Newt Gingrich and former Pennsylvania Sen. Rick Santorum announced they were both joining the boycott.

Huntsman's campaign manager said in a statement that the decision underlined the candidate's commitment to New Hampshire's first-in-the-nation primary status.

Huntsman is struggling to break through in national polls and is now concentrating singularly on New Hampshire, hoping a win in the state could reinvigorate his campaign.

"The Huntsman campaign will boycott the Nevada caucus as long as the state continues to jeopardize New Hampshire's primary date," said campaign manager Matt David in a statement.

In the statement, David alleged the campaign of former Massachusetts Gov. Mitt Romney had pushed Nevada to move up its caucus date.

"We call on the other campaigns to join us, especially Governor Romney's campaign given their involvement in moving Nevada's date forward," David said.

A national committeeman on the Nevada GOP's executive board told the Las Vegas Review-Journal that Romney had pushed for Nevada to move up the date of its caucus.

Romney's campaign has not specifically commented on the charge made by the committeeman.

Romney said Thursday he respected New Hampshire's first-in-the-nation status, but would not be boycotting other states.

"Governor Romney respects the essential role our Primary plays in selecting our Republican nominee, and is unequivocally committed to New Hampshire hosting the first Primary contest during the 2012 cycle and beyond," Romney's New Hampshire adviser Jim Merrill said in a statement. "Governor Romney will compete in every nominating contest across the country, regardless of when they may be scheduled, so long as New Hampshire retains its First in the Nation Primary status."

In a statement, Texas Gov. Rick Perry's spokesman said their campaign would also compete in every state.

"Gov. Perry respects and supports the long tradition of New Hampshire having the first primary in the nation," Rob Johnson said. "The movement of early primaries and caucuses has pitted states against each other and will only hurt the political process. Gov. Perry will actively and vigorously campaign in every state. Ultimately, we hope the Republican National Committee will come up with rules that are enforceable and protect the traditional calendar."

Paul said boycotts would be harmful to the electoral process.

“This talk of boycotts doesn't serve the electoral process any more than the states' jockeying for position and primacy,” Paul said in a statement. “New Hampshire deserves its rightful place as the first primary in the nation, but we will fight to preserve that place without depriving Nevada or Iowa voters of their say in the 2012 nomination process.”

Gingrich and Santorum both came out Thursday in support of the boycott.

"As a citizen, I have always supported New Hampshire's First in the Nation Primary," Gingrich said in a statement. "Now, as a candidate for president, I am committed to competing in and maintaining the first in the nation status of the New Hampshire primary. Therefore, I will not compete in a state which holds its contest inside of one week of New Hampshire."

Santorum followed suit with a statement of his own: "Nevada's move has potentially forced the other early states to have primaries near Christmas - and that destroys the primary process. I firmly believe that we must protect New Hampshire, the other early primary states and the proven presidential primary process. To be clear, I will not campaign in Nevada nor participate in the Nevada caucus if it doesn't move its primary date."