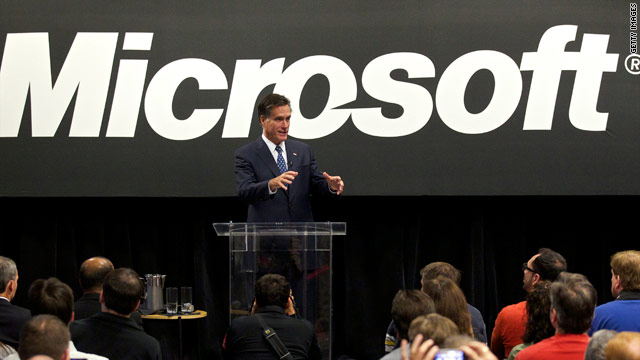 (CNN) - Mitt Romney had tough words Thursday for China, calling the world’s second-largest economy a "cheater" for manipulating its currency.

“China has learned the extraordinary effect of cheating, and it has had a very positive effect on China and a very negative effect on us,” Romney said.

He cited reports of Chinese hacking and intellectual property theft as examples of how China is corrupting the global economic system.

Romney said tougher policies, such as enacting higher duties on Chinese goods, would counterbalance what he called currency manipulation.

"On Day One of my administration, I would designate China as a currency manipulator," Romney said.

"I would apply countervailing duties on Chinese goods where they have stolen intellectual property or where their currency manipulation is killing American businesses and jobs unfairly," he continued.

Romney said the U.S. is currently enduring a “trade surrender” with China, and that the actions he proposes are needed to prevent the spread of China’s tactics to emerging economies such as Brazil or Indonesia.

“We don't need new legislation. We need a new president,” Romney said to applause. “If I'm the new president, I will not participate in any form of deception. I will go to work to make sure that free trade works, that it's power and benefit is for all people on both sides of the ocean, because we can compete with anyone in the world.”