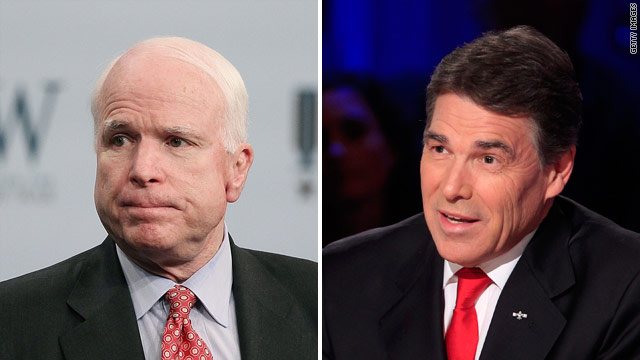 (CNN) -– Sen. John McCain has some advice for Gov. Rick Perry ahead of Tuesday’s CNN Republican debate: Get some rest.

“Every time I made a serious mistake politically - and I’ve made them - it’s been when I’m tired,” McCain said in an interview Friday on CNN’s “The Situation Room with Wolf Blitzer.”

When asked if he had any advice for the Texas governor, who is struggling in the polls, McCain also suggested that Perry makes sure to practice before the event.

“Get somebody in there who will give it a good scrubbing, who will play these individuals, who will play Romney, for example, and really put it to you so that you’re prepared for any question that comes up,” McCain said.

McCain, who defeated former Massachusetts Gov. Mitt Romney in the 2008 Republican primaries, praised Romney’s 2012 campaign for maintaining a “steady strain” but also said that anything can happen between now and the Florida primary.

“If you and I had been chatting two or three weeks ago and I would have said Herman Cain is ahead, you would have thought I was smoking something fairly strong,” McCain said.

“It appears it is a tax increase for some middle-income or lower-income Americans and I would look forward to hearing his explanation,” McCain said. “I’m not condemning it, but I certainly wouldn’t favor that.”

In the latest CNN Poll of Polls, Romney is leading with 23% of the vote. Cain is close behind with 20% and Perry, who was leading most polls in September, dropped down to third place with 14% of the vote.