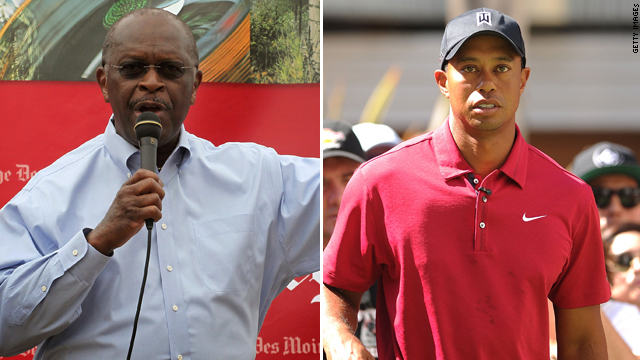 The column, which ran on a conservative website run by Cain, reads like a serious argument for the once highly esteemed golfer.

"Tiger will be 40 years old in 2016," Cain wrote. "The Republican Party should begin grooming him now for a run at the White House. His personal attributes and accomplishments on the golf course point to a candidate who will be a problem solver, not a politician."

In the column - written years before Woods became mired in scandal over extra-marital affairs - Cain went on to write that Republicans need an outsider as its future presidential nominee.

"Tiger Woods could be an inspiring figure for the country, the likes of which we have not seen since Martin Luther King, Jr. and Ronald Reagan," Cain wrote, adding that the 2016 candidate should not come from inside the beltway, but "from inside the fairway, for all of us."

But Cain, former CEO of Godfather's Pizza, said Sunday he was not being serious when he wrote the op-ed.

"Yeah I can be pretty serious," Cain said to reporters in Washington after an appearance on NBC News. "But also there are some things that, you know, you just kind of take tongue and cheek, and you don't make a big deal of it. Alright?"