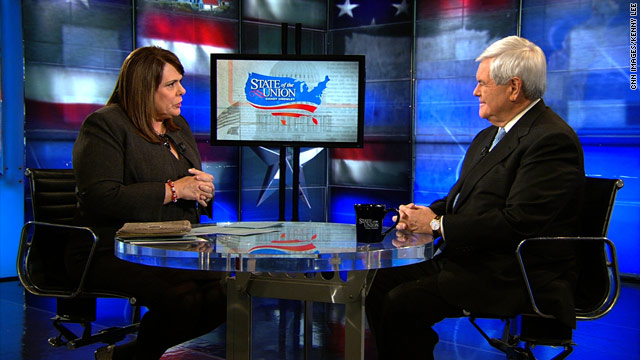 Gingrich: Cain has a strong shot at nomination

“If Herman figures out how to do it all right, and if he can explain a 9% sales tax so people decide they want it, he has a good chance to be the nominee,” Gingrich on CNN’s “State of the Union.”

But Gingrich, who’s struggling to boost his poll numbers into the double digits, said the former CEO of Godfather’s Pizza has some work to do in convincing voters of his "9-9-9" tax plan.

Cain has surged to top tier status in promoting his tax proposal, which has been at the center of economic talk in the 2012 race in recent weeks. It would replace the current tax system with a 9% rate on income taxes, a 9% rate on corporate taxes and a new 9% national sales tax.

Gingrich argued Cain’s tax pitch wouldn’t go far in states like New Hampshire, a key early voting state that lacks a sales tax and, according to Gingrich, could face a tax increase with the plan

“As people look at ‘9-9-9’ and disaggregate it, it gets to be a lot harder to sell,” Gingrich told CNN Chief Political Correspondent Candy Crowley.

Weighing in on another front-runner, the former House speaker said that despite being likable, hard working and smart, former Massachusetts Gov. Mitt Romney has a “huge problem.”

Romney, who’s making his second White House bid, has held steady at the top for most of the 2012 election cycle.

Comparing Romney to former Vice President Nelson Rockefeller, who ran for the Republican nomination multiple times but failed to win, Gingrich said Romney will have to persuade voters that this is the time to put him in the Oval Office.

“Mitt’s challenge is going to be that—because he’s now been running for six years—that people look and they say, ‘Well, not yet’,” Gingrich said.