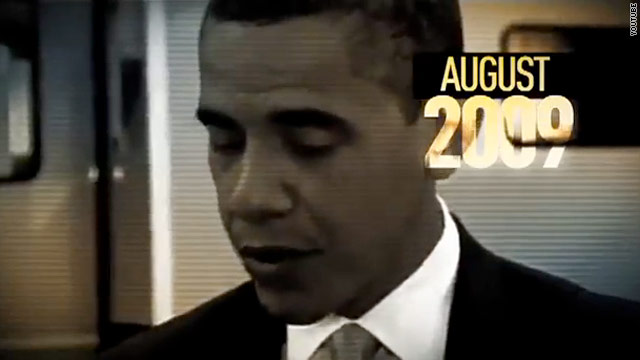 Washington (CNN) - As President Barack Obama hits the road in North Carolina and Virginia to sell his jobs plan this week, a conservative group is pushing back through an ad set to air in the two states.

Clinton has previously disputed the group's use of his words, which he said in a September speech. He's argued the quote was taken out of context and that he stands by the president's jobs plan.

The ad mostly hits Obama over the so-called "millionaire's tax," a compromise reached between Senate Democrats and the White House that would help pay for Obama's $447 billion jobs plan. The controversial measure would raise taxes on those making more than $1 million.

When brought to a vote on Capitol Hill last week, however, the measure failed to gain enough approval and was stalled in the Senate.

The ad aims to show Obama waffling on his position on taxes, quoting him from 2009 saying that the "last thing we want to do is raise taxes in the middle of a recession."

The $80,000 ad buy will air in Virginia until Tuesday and in North Carolina from Monday through Wednesday. Obama won both battleground states in the 2008 presidential election.

"The president's new jobs bill is based on the old ideas behind the first failed stimulus – only this time it's tied to a massive tax hike," said American Crossroads communications director Jonathan Collegio in a statement.

American Crossroads is a conservative independent advocacy group that has become a major player in backing Republican causes and candidates.

But Priorities USA, a Democratic super PAC that launched in 2010 to compete with Republican groups, countered the ad's message, saying it misleads viewers into thinking the president wants to raise taxes on middle class families.

"The billionaires and oil companies funding these ads are desperate to stop President Obama's plan that would ask them to pay their fair share in taxes to reduce our debt and create jobs," said Bill Burton, senior strategist for the group, in a statement.