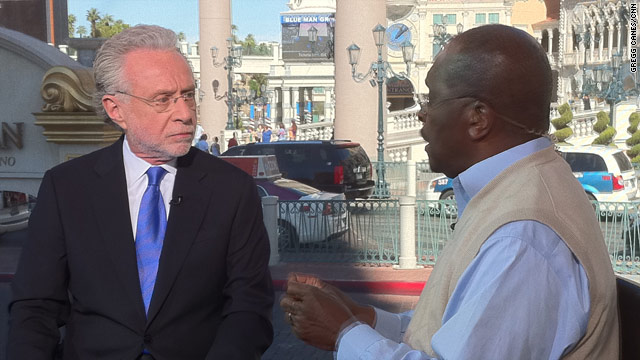 Cain: I can feel the bull's-eye

(CNN) - Herman Cain said Tuesday he could feel the pressure from his fellow 2012 candidates ahead of the CNN Western Leadership Conference Debate in Las Vegas.

"The way it feels is that you got this big bull's-eye on your back, and it keeps getting bigger," Cain told CNN's Wolf Blitzer on "The Situation Room."

"It feels great, but as you know, the challenge is 'how do we continue that momentum?' and we believe we know how to do it."

Cain said he was prepared to take on the current GOP frontrunner, former Massachusetts Gov. Mitt Romney, who Cain said was trying to present himself as something he was not.

When asked if Romney was a Christian, Cain refused to answer, saying he was focusing instead on his opponent's platform.

"I want to basically defeat Mitt Romney based upon the strength of my ideas versus his," Cain said. "I think I've got a strong plan relative to his, as well as strong ideas about the other issues we face."

When responding to foreign policy questions, Cain gave mostly vague answers, saying that he would need all of the intelligence and data to give firm answers. When asked about Monday's swap of one Israeli soldier for thousands of Palestinian prisoners, Cain wouldn't say for sure if he would make a similar decision as president. Cain wouldn't say whether he'd support the Israeli government's decision.

"I would have to know all of the considerations he made to say yes or not, because I'm sure that there were a lot of considerations he had to make in order to make that decision," Cain said. "On the surface, you would say one for hundreds doesn't make any sense, but here's how I make decisions and this is why I respect Prime Minister Netanyahu so much. He looks at all of the facts before he makes a judgment call. We don't know all the facts."