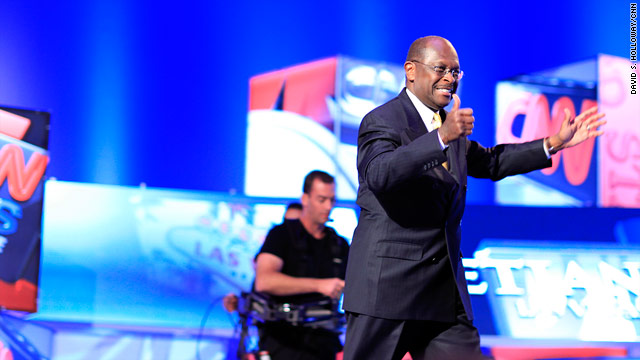 Cain: I misspoke about negotiating with terrorists

(CNN) - Herman Cain said he made a mistake Tuesday when he said he could see himself negotiating with al-Qaeda if he were elected president.

"I misspoke," Cain told Anderson Cooper immediately following the CNN Western Republican Debate in Las Vegas. "Because I didn't, you know, things are moving so fast, I misspoke. I would not do that, I simply would not do that."

Cain made the original assertion in an interview Tuesday with CNN's Wolf Blitzer.

Blitzer asked if Cain would be willing to negotiate with al-Qaeda by releasing all of the prisoners at Guantanimo Bay.

Cain said after the debate that he was confusing two situations, since a previous question had been whether or not Israeli Prime Minister Benjamin Netanyahu had done the right thing by releasing hundreds of Palestintian prisoners in exchange for the release of an Israeli soldier.

"Here is how I was misspeaking about our situation," Cain said. "I said Prime Minister Benjamin Netanyahu had a lot of things to consider in order to make that decision. What I'm saying is I can't say he did the right thing or the wrong thing just based on the numbers. That is the point I was trying to make. I probably misspoke when I went from that situation over to this situation. You got to have all the facts."

Cain also said after the debate that he was fully prepared to compete in the early voting states of New Hampshire and Iowa, despite reports that he wasn't serious about winning those states.

Cain continued, "We are hiring people for our corporate office and in all of the states, we are ramping up. The good news is, plenty of good people out there and we are adding them very rapidly. We're in it to win it."