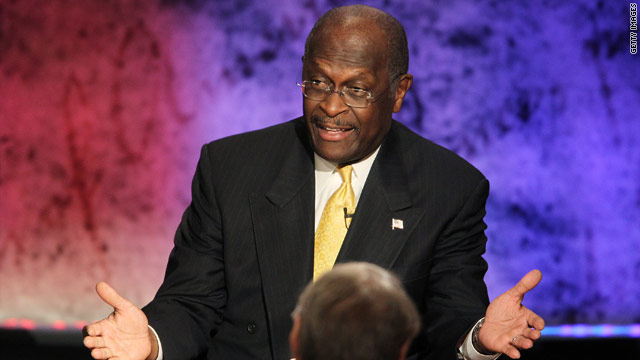 Las Vegas, Nevada (CNN) - What's the secret to Herman Cain's recent surge in polls in the race for the GOP presidential nomination?

A new national survey out hours before a CNN/Western Republican presidential debate points towards likeability and the businessman and former Godfather's Pizza CEO's much touted "9-9-9" tax reform plan.

According to the CNN/ORC International Poll released Tuesday morning, 34% of Republicans and independents who lean towards the GOP say that Cain is the most likable candidate in the race, putting him at the top of the list a few points ahead of former Massachusetts Gov. Mitt Romney.

"The same pattern holds when we ask about the economy," says CNN Polling Director Keating Holland. "Among Republicans, 33% say that Cain is most likely to get the economy moving, again putting him in the top spot."

But electability may be Cain's Achilles heel. Only 18% of Republicans say that Cain is most likely to win the GOP nomination, and only a quarter say he has the best chance of beating President Barack Obama in the general election.

Who is the most electable candidate, according to GOP voters?

"Mitt Romney - and it's not even close," says Holland. "Four in ten Republicans say that Romney is most likely to get the party's nomination, and 51% say he has the best chance of beating Obama in the fall. On both those measures, Romney's numbers have improved dramatically, while Texas Gov. Rick Perry has been sinking like a stone."

The CNN poll was conducted by ORC International on Oct. 14-16, with 1,007 adults, including 416 Republicans and independents who lean towards the GOP questioned by telephone. The survey's sampling error is plus or minus five percentage points.