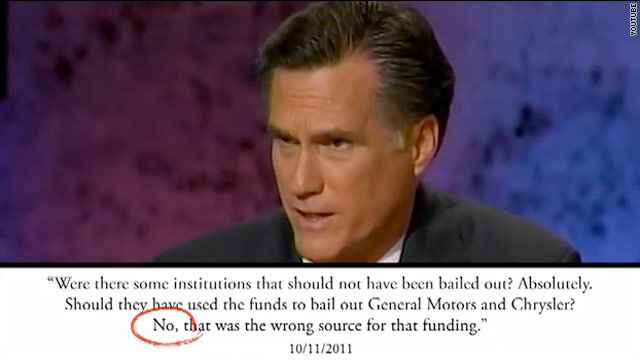 Washington (CNN) - As GOP presidential hopeful Mitt Romney holds onto his front-runner status going into Tuesday's debate, Democrats again went after the candidate in a new video aimed at showing Romney as a "flip-flopper."

"In the past week, we’ve seen Mitt Romney confirm what we already know from his positions on gay rights and a woman’s right to choose – that he’s a flip-flopper who changes his tune to fit each new audience," said Alec Gerlach, regional press secretary for the Democratic National Committee, in a statement Tuesday.

The DNC and Obama's re-election campaign have been drumming up their message for weeks, consistently pointing out Romney's change of course over time.

In the new video, the latest in a series on Romney from the DNC, the group shows clips of Romney taking different stances on payroll tax cuts, China's trade practices and the auto industry bailouts.

"In each instance, he made a complete 180," said Gerlach.

The nearly two-minute web video ends with one question: "Wonder which Mitt you'll get at tonight's debate?"

The piece follows a string of attacks that Democrats have launched against Romney, who's making his second bid for the White House.

Senior Obama campaign strategist David Axelrod questioned the former governor's record this weekend in an interview on ABC's "This Week" and held a conference call last week with reporters, where he repeatedly blasted Romney as an inconsistent candidate.