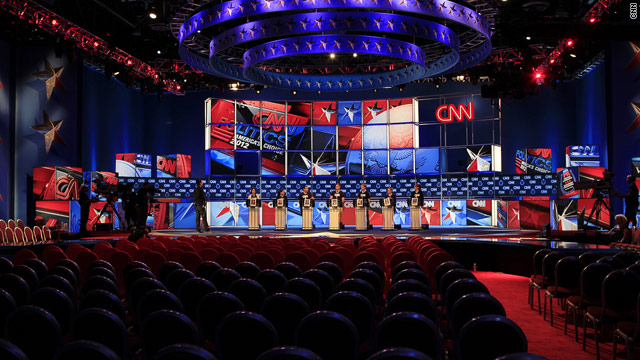 Las Vegas, Nevada (CNN) - Reminiscent of college drinking games, the Obama re-election team has come up with a variation to get donors to contribute during Tuesday night's CNN Western Republican Leadership Conference debate.

Donors are asked to choose key words that almost certainly will be mentioned frequently during the debate. A player is asked to pledge $3 or $5 for each mention of a chosen word by one of the candidates who wants to replace President Barack Obama.

"The campaign has put together a debate watch game to make sure there's a real cost to the attacks and nonsense," reads the email solicitation sent out Tuesday afternoon from the campaign's national finance chairman Matthew Barzun.

So ironically the more President Obama and his policies are attacked the more money could go into his re-election campaign's coffers.

"So I'm looking forward to seeing what you think they'll say this time. We should have some fun with this - it's Vegas, after all. But we're not just doing this for our own entertainment. We're building a campaign that can withstand a barrage of special-interest funded attacks from the other side, and make sure President Obama can continue the important work we have left to do," says Barzun.

While those old college drinking games were designed to get players drunk, donors can put a limit on their donations in case they hit the jackpot of word choices. The debate is in Las Vegas after all.