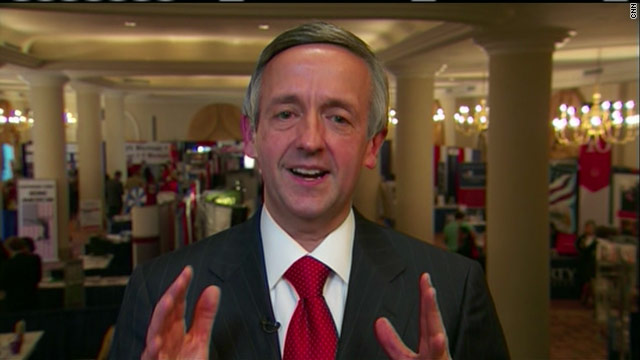 (CNN) - The controversial pastor who called Mormonism a "cult" after introducing Rick Perry at a conservative conference is firing back at his critics, saying religion has an important place in presidential politics.

"Hearing Mitt Romney's surrogate Bill Bennett refer to me as a bigot and Jon Huntsman call me a 'moron' last week after my controversial comments on Mormonism, amid calls for civility and tolerance in public discourse, reminds me of the exclamation: 'We will not tolerate intolerance!'" Robert Jeffress wrote in an opinion piece in the Washington Post published Tuesday.

Jeffress continued, "I am concerned that these men are attempting to prematurely marginalize religion as a relevant topic in elections."

Jeffress is the pastor of the First Baptist Church of Dallas, which boasts a congregation of thousands and a highly visible pulpit. He has publicly endorsed Texas Gov. Perry, and has praised the candidate's evangelical faith as part of the reason for his endorsement.

Speaking to reporters at the Values Voter Summit in Washington Oct 7, Jeffress said he thought Republicans should avoid voting for former Massachusetts Gov. Mitt Romney in a primary election because he is a Mormon.

Jeffress sought to clarify those remarks in his opinion piece Tuesday.

"While I prefer a competent Christian over a competent non-Christian, religion is not the only consideration in choosing a candidate," Jeffress said. "Frankly, Christians have not always made good presidents. We must also consider whether a candidate is competent to lead and govern according to biblical principles."

In the days since Jeffress made the comments, GOP candidates have come out against his sentiments by saying they don't believe religion should play a large part in selecting a candidate. Jeffress disputed those claims in his piece Tuesday.

"Discussion of a candidate's faith is relevant," Jeffress wrote. "During a time of rising unemployment, falling home prices and massive deficits, it is easy to relegate religion as an irrelevant topic. Yet our religious beliefs define the very essence of who we are. Any candidate who claims his religion has no influence on his decisions is either a dishonest politician or a shallow follower of his faith."