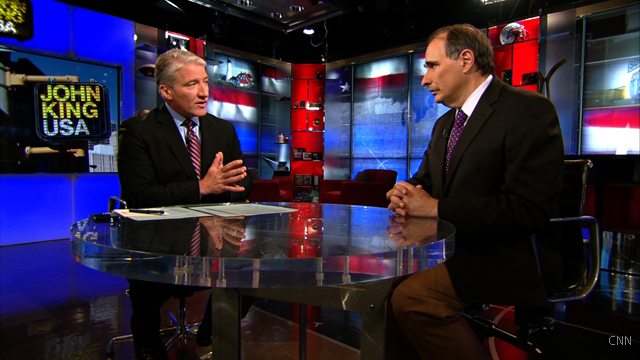 Axelrod on the GOP field: Romney vs. an un-Romney

Washington (CNN) – When asked about the shifting landscape in the GOP presidential race, President Barack Obama's senior campaign strategist David Axelrod attributed the back and forth to many Republican voters wanting to coalesce around a candidate that is unlike former Massachusetts Gov. Mitt Romney.

"We've had Romney and an un-Romney in a variety of iterations throughout this campaign," Axelrod said Wednesday during an interview with CNN Chief National Correspondent John King.

"Michele Bachmann filled the role for a while, Rick Perry soared to the top and when he came down to earth, Cain took his place. Romney sits there at 23 percent, 24 percent of the vote in all these polls and the question is why aren't they buying Mitt Romney?"

Axelrod said Romney's vacillation on key issues has given GOP voters pause as they analyze his political career.

"He's been running for president for 6 years," Axelrod explained.

"He can shift so easily from position to position on fundamental things like health care, like choice, like gay rights and almost anything you put your finger on," Axelrod said.

Continuing this line of attack on Romney, the strategist said "you get the sense that everything is in service of running for office and so no position or principal is too great to abrogate in service."

"People don't know where his core is, they don't know what he believes and what principal he's actually fighting for other than his own advancement politically."

The president's chief strategist pointed to Tuesday's CNN Western Republican Presidential Debate in Las Vegas, Nevada, to comment on some of the other GOP hopefuls.

He had kinder words for Texas Gov. Rick Perry, saying, "he seems to believe what he believes. I suspect that what he says today is what he'll say tomorrow."

When asked about whether he agreed with President Barack Obama giving himself an "incomplete" when asked to grade his performance as president thus far, Axelrod co-signed that assessment.

"It took a long time to get in the mess we're in, it's going to take some time to get out," he explained.

"He's right to give himself an incomplete. We've got more work to do."