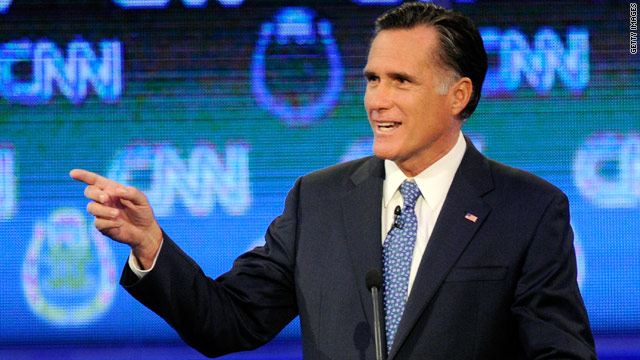 Romney: ‘There’s a good shot I might become the next president’

Treynor, Iowa (CNN) – Mitt Romney on Thursday said he has a "good shot" at becoming president.

At an economic roundtable of business leaders in Treynor, Iowa, the candidate began the question-and-answer session by saying: “Your topics are at your choosing. But there’s a good shot I might become the next president of the United States. It’s not a sure thing, but it’s a good shot.”

Romney continued: “And if I am, I will benefit by having heard from you, your thoughts about what we can do better to encourage your enterprise, or enterprise generally, both on a short-term basis and long term.”

His meeting with business leaders was his second stop of the day in Iowa. Earlier, he campaigned in Sioux City. And after the economic roundtable, Romney met with voters at the Chamber of Commerce in Council Bluffs.

Though Romney has done scant campaigning in the Hawkeye State during this political cycle – this was his first visit since August – polls for Iowa have shown him either leading or maintaining a strong showing.

During his appearances, the former Massachusetts governor waded into myriad issues.

For example, in Treynor, Romney sounded familiar criticism of the Obama administration. “I’m concerned that our current leadership in Washington doesn’t have a fundamental understanding of how our economy works,” he said.

The candidate also reiterated his opposition to the president’s $447 billion jobs bill.

“He’s promoting a stimulus bill,” Romney said. “Look, the first one he put in place three years ago didn’t work. I don’t know why we’d vote for another one. Or agree to another one.”

Though Romney blasted the president’s plan - he did speak glowingly about the need to improve the nation's deteriorating infrastructure. Ironically, that is one central component of the president’s jobs bill.

It happened after Romney received a question from a man in the audience who said he spent most of his work life in the highway contracting industry.

“The first stimulus bill, we built a lot of stimulus projects,” the man said. “As you know, they were a flash in the pan. Now we’re back to the way it was before. I guess one problem we have in our industry is not constant funding of that.”

The man then asked Romney: “I just want to know what your views were on infrastructure, maintenance and development?”

“One of the things you have to have for an economy to work is an ample infrastructure,” Romney responded. “And our infrastructure is antiquated."

Romney continued: “I know in my state of Massachusetts, when I came in they told me we had 550 structurally deficient bridges. I said, ‘You gotta be kidding me. Five hundred and fifty structurally deficient bridges?’ And so we doubled our budget to work on our bridges, from $100 million a year to $200 million a year. But we got a lot more to do in this country to bring our infrastructure up to speed. And I’m looking at a series of proposals, to find ways – whether through public/private partnerships, whether through a special series of revenue streams such as tolls and so forth, to be able to make the investment we’ve got to make in our infrastructure.”

The candidate added: “We’ve got to find a way to rebuild our bridges, to rebuild the roads that were built in the 1950s and 1960s under the Eisenhower interstate highway system, and we’re going to have to improve many of our infrastructure projects.”

That language is not far off from language the president has recently used to promote his jobs plan.

For example, on September 22, Obama visited an old bridge spanning Ohio and Kentucky to talk about the nation’s deteriorating infrastructure.

"There's no reason to stand in the way of more jobs," the president said. "Mr. [House Speaker John] Boehner, Mr. [Senate Minority Leader Mitch] McConnell, help us rebuild this bridge. Help us rebuild America. Help us put this country back to work. Pass this jobs bill right away."

At other times, the president also has pushed the need to rebuild the nation’s crumbling infrastructure.