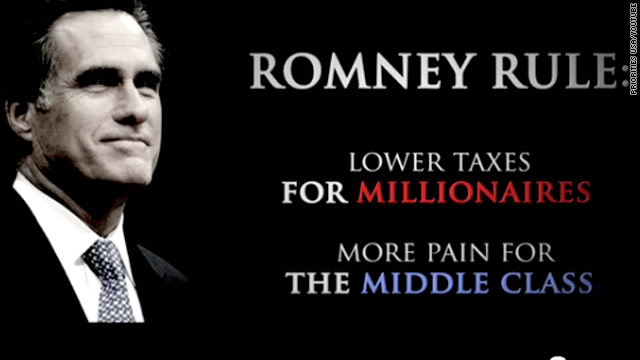 In the video, the former Massachusetts governor is berated for his attitude toward taxes, or what the political-action committee calls the “Romney rule.”

“Have you heard of the Romney rule?” a narrator asks at the ad’s open. “Mitt Romney believes millionaires like him are entitled to pay taxes at a lower rate than teachers, cops or construction workers.”

Priorities USA is dedicated to re-electing President Barack Obama. In the five-figure ad buy, the spot also claims, “While Romney doesn’t want millionaires like him to pay a nickel more, he doesn’t see the big deal with letting taxes go up by $1,000 for hardworking Americans.”

“That’s the Romney rule: lower taxes for millionaires like Mitt. More pain for middle-class folks like us,” the narrator declares.

Romney’s campaign hit back in a written statement.

“This is another pathetic attempt by President Obama’s political machine to distract attention from their nonexistent record on creating jobs,” Romney spokesman Gail Gitcho said.