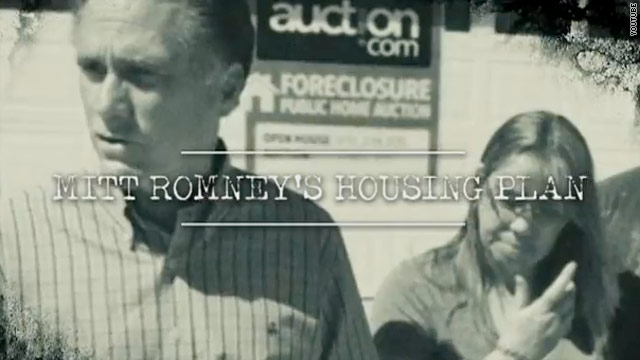 "To Mitt Romney, houses aren't places where people raise their families and build lives," said Brad Woodhouse, communications director for the Democratic National Committee, in a conference call with reporters. "They're investments to make a profit."

The DNC rolled out a new website and video featuring Romney's remarks this week to the Las Vegas Review-Journal, where he said one way to encourage a housing market rebound is to let the home foreclosure process "run its course."

"Don't try and stop the foreclosure process," Romney said. "Let it run its course and hit the bottom, allowing investors to buy their homes, put renters in them, fix the homes, and let it turn around and come back up."

At the CNN Western Republican Presidential Debate on Tuesday, Romney addressed the foreclosure issue and stood by his earlier remarks.

"The right course is to let markets work. And in order to get markets to work and to help people, the best we can do is to get the economy going," Romney said.

But the DNC and the Democratic parties of Florida and Nevada, key early voting states with high foreclosure rates, teamed up to hammer Romney over the comments, pinning him as an insensitive politician who sides with Wall Street in the housing crisis.

"Sometimes when you watch Mitt Romney on the campaign trail, you wonder if he's running to be the chairman of the board a Fortune 500 company, as opposed to running for president," said Woodhouse.

This is the second time in three days Democrats have gone after the former governor on the issue. Wednesday, President Barack Obama's re-election campaign also held a conference call with reporters to criticize Romney's debate performance, as well as his position on foreclosures.

The DNC's "foreclosure" video marks a new campaign against Romney, who frequently registers in national polls as the most electable GOP candidate against Obama. In recent weeks, national Democrats have largely targeted Romney as a flip-flopper, using websites and press conferences to get their message out.

Repeating a line used frequently in response to the Democratic attacks, Romney's campaign hit back Friday saying Obama and his re-election team are trying to distract from their "failures."

"President Obama and his campaign will continue to do everything they can to distract from their failures," said Andrea Saul, the Romney campaign communications director. "Under President Obama, millions of Americans have lost their homes, with 2.9 million foreclosure notices filed just last year. Mitt Romney is a conservative businessman who has an economic plan that will actually create jobs and keep people in their homes."