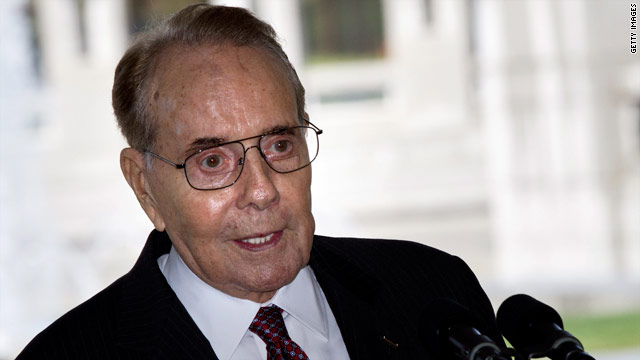 Washington (CNN) - Hundreds of his former colleagues, aides and people from across the political aisle gathered in Washington Friday evening to honor former Republican Senate Majority Leader Robert Dole, who marked his 50th anniversary of being elected to Congress.

Dole, a native of Kansas, told the crowd he got into politics by accident.

The 88-year-old said he had one guiding principle.

"I have found in my political life the one word that means a lot is trust. You have to be willing to trust one another if you are going to get anything done."

He told the audience being rigid is not something that leads to achievements.

"You have to have a little flexibility," Dole said. "Sometimes you have to give a little."

Dole also said some keys that helped him reach agreements with Democrats are missing today–and the nation is suffering.

"Some of the trust. Some of the friendships... I think we can do better, and I believe we will."

The occasion was a fundraiser for the Dole Institute of Politics at the University of Kansas.

Among the achievements they highlighted was his fundraising leadership for the building of the National World War II Memorial.

"You have touched so many lives, and we are grateful for it," Roberts said.

Dole has suffered from several illnesses in recent years, and spent 11 months at Walter Reed Army Hospital in 2010 after a bout with pneumonia.

"I never really thought I wanted to spend that much time there," he joked. Dole said he is recovering well and able to get around better.

In his remarks Dole showed his trademark humor. Though he left the Senate voluntarily in 1996 when he ran for the presidency, Dole noted, "I didn't leave politics voluntarily."

He lost the general election to Bill Clinton and joked that he'd often ask Clinton for a recount.

Explaining that he may phone one or two people a day or find other ways to be involved, Dole said he still works to have an impact because he can say "I made a little difference."

The Institute houses Dole's congressional papers that span his 35 years of congressional service. It also hosts a wide variety of programs and speakers to encourage public service by young people.