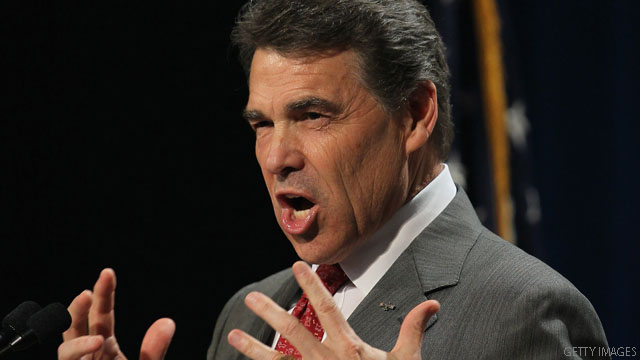 Perry, who has stumbled in Republican polls as Cain has risen, was speaking at a banquet in Iowa organized by the conservative Faith and Freedom Coalition.

“It is a liberal canard to say I am personally pro-life, but government should stay out of that decision,” Perry said. “That is not pro-life, that is pro-having-your-cake-and-eating-it-too.”

Perry did not mention Cain by name but the implication was clear.

Cain took hits from several of his GOP rivals earlier this week after an appearance on CNN in which he appeared to suggest that while he was personally opposed to abortion, families should ultimately be allowed to make the decision to terminate a pregnancy in cases of rape or incest.

Cain has since distanced himself from the remarks, and said in his own speech at the Faith and Freedom event that he was opposed to abortion, “no exceptions.”

Perry, though, made a point of devoting several minutes of his speech to the topic of abortion, an appeal to the roughly 1,000 conservative activists at the event.

He pointed to a litany of bills he has passed in Texas that have restricted abortion, including parental notification legislation and the de-funding of Planned Parenthood there.

"Being pro-life is not a matter of campaign convenience, it is a core conviction," he said.