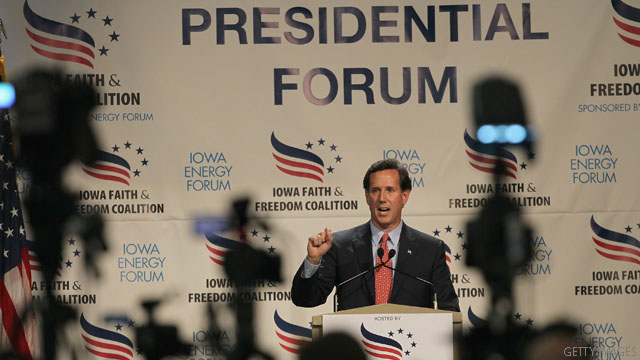 Santorum asks if Republican rivals can be trusted

Des Moines, Iowa (CNN) - Republican presidential contender Rick Santorum claimed Saturday that he has been a loyal soldier in the fight against abortion and questioned the conservative bona fides of his primary rivals.

The former U.S. senator from Pennsylvania was the final speaker at a presidential forum in Des Moines organized by the Faith and Freedom Coalition. From the outset, he tried to contrast himself with his opponents.

He listed several bills that he sponsored and voted for as a member of the Senate during the Bill Clinton and George W. Bush presidential administrations, including legislation banning partial-birth abortion and outlawing embryonic stem cell research.

“I wan an offensive coordinator on the life issue,” Santorum said. “I was trying to move the ball down the field.”