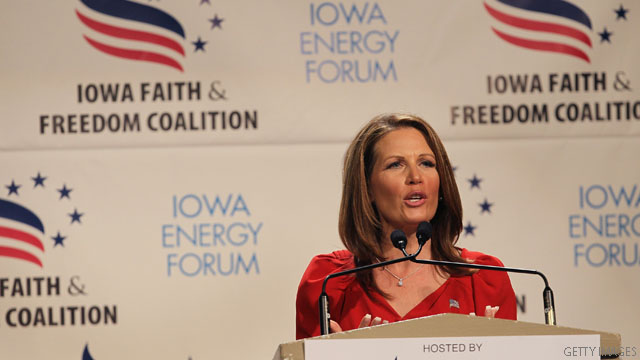 Des Moines, Iowa (CNN) - Republican presidential candidate Michele Bachmann stressed her social conservatism to a large gathering of evangelicals in Iowa, where she has fallen from high poll positions.

Bachmann keyed in on issues of interest to the roughly 1,000 people at the Iowa Faith and Freedom Coalition in Des Moines on Saturday.

"It was when I became 16 years of age that I was confronted with the question in my own life. What would I do in Jesus Christ?" Bachmann said. "What would his place be in my own life? And I made a decision on November 1, 1972 - when I bowed my knee and received Jesus Christ as my Lord and Savior. And my life was changed forever."

From there, the Minnesota congresswoman waded into a number of other issues: from the controversy over Israel's borders, to protecting the U.S. border with Mexico.

Bachmann also touched on one issue of special importance to social conservatives.

"I want you to know quite firmly, I stand for life - from conception to natural death," Bachmann said regarding abortion.

After her speech, the candidate was asked her feelings on the still brewing controversy surrounding fellow GOP candidate Herman Cain. The conservative businessman caused a stir last week after comments to CNN's Piers Morgan seemed to suggest he was not fully committed to ending legalized abortion in the U.S. - a passionate cause for conservatives.

Cain, also attending the forum, attempted to erase doubts about his pro-life stance during his speech. But it was not enough to convince Bachmann.

"Well I think its very important that our candidate for the presidency is a pro-life candidate. We're a pro-life party," Bachmann told reporters. "And the president of the United States says that he is personally against abortion. But he doesn't believe that the government shouldn't be involved. And that is the statement that Mr. Cain made. And that's very disturbing for a lot of people. And it's very important that our candidate for president can clearly articulate that they are pro-life and that they believe that life deserves protection - from conception till natural death."