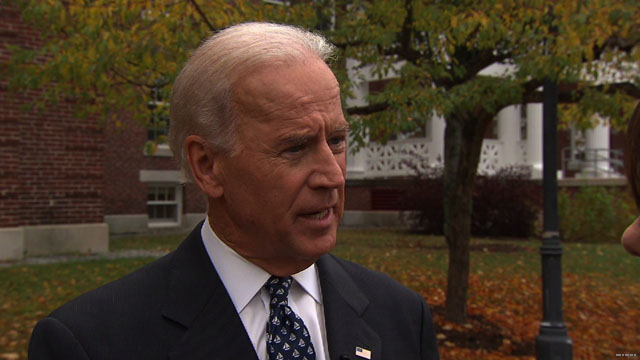 (CNN) - Vice President Joe Biden said he was not making a political or ideological point when he suggested earlier in the week that rapes and other crimes would increase if Republicans block a measure aimed at preserving police jobs.

"They either are going to figure out how to help those cities the way we want to help them, or some other way. But if they don't get help, crime is going to continue to go up. It's that simple," Biden said in an interview that aired Sunday on CNN's "State of the Union." "It's not an ideological point, it's not a political point, it's just a physical reality."

During a speech Wednesday, Biden said murder, robbery and rape rates have increased in cities like Camden, New Jersey and Flint, Michigan due to budget cuts. He added that those rates would rise further if Republicans oppose a $35 million provision of President Barack Obama's jobs bill intended to pay for the hiring of police officers, teachers and firefighters.

Biden stood by his comments later in the day in a contentious exchange with a reporter on Capitol Hill.

"And if the Republicans don't pass this bill, then rape will continue to rise?" the reporter asked.

Some on the other side of the aisle seized on the comments, accusing the former Delaware senator of blaming the GOP for crime rates in cities like Flint, where serious crimes fell by a rate of 6% in 2010.

But Biden said recent cop layoffs are the beginning of a downward cycle that will stem from the economic downturn, and he turned the table on Republicans.

"The question is … we have an answer. What's their answer? Or do they think the federal government has no obligation?" Biden told CNN Chief Political Correspondent Candy Crowley. "I respect it if they think that. But the truth is we can fix this problem now."