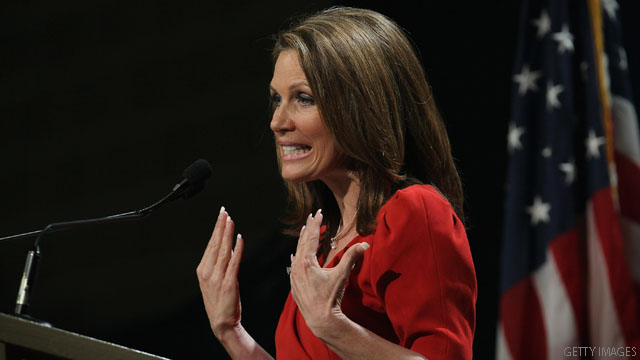 (CNN) - Republican presidential candidate Michele Bachmann continued to hit rival Herman Cain's conservative credentials Sunday amid a recent dust up over comments he made about abortion.

Bachmann said the remarks made earlier this week were further evidence of the businessman's "troubling" policy shifts.

"You can't have all of these flip-flops in our nominee, one after another," the Minnesota congresswoman said on "Fox News Sunday." "It's making the voters' heads spin. I think it's giving people pause and they're asking real questions about what does he believe truly and how would he govern as president of the United States."

She issued similar criticism Saturday in Iowa at a presidential forum organized by the Faith and Freedom Coalition, comparing Cain's views on abortion to those of Democratic President Barack Obama.

During an interview with CNN's Piers Morgan, Cain said he is pro-life, even in cases of rape or incest. But when Morgan asked how he would feel if a member of his family were raped and if he would want that family member to raise the child, Cain said it is "not the government's role or anybody else's role to make that decision."

Cain was quickly criticized for what some saw as an ambiguous stance, leading the former Godfather's Pizza CEO to repeatedly restate his position on the issue that is important to conservative voters. On Saturday he went a step further, saying he "would not sign any legislation where government funded abortion."

Bachmann, who has seen a drop in her national poll numbers, also took aim at Cain's comments about releasing prisoners at Guantanamo Bay.

Cain told CNN's Wolf Blitzer on Tuesday that he would be open to negotiating with al Qaeda by releasing prisoners from the site if he were elected president, something he walked back during the CNN Western Republican Debate when he said he would not negotiate with terrorists.

"People want to make sure that our nominee is 100% pro-life, 100% standing for marriage between a man and a woman and they certainly don't want to see terrorists like Khalid Sheikh Mohammed released from Guantanamo Bay," Bachmann said. "That's non-negotiable."

- CNN's Shannon Travis and Kevin Liptak contributed to this report.