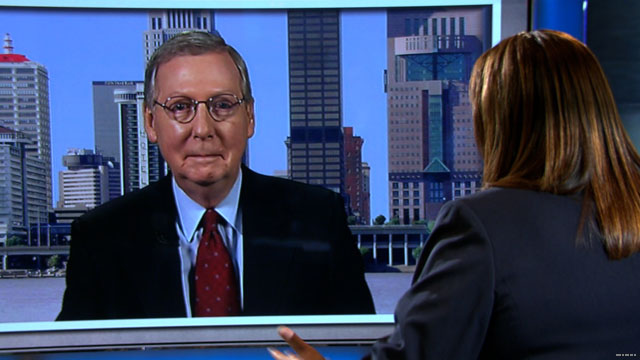 (CNN) - Senate Minority Leader Mitch McConnell disagreed Sunday with Vice President Joe Biden’s hypothesis that the 2012 election will be a choice between Democrats and Republicans, and instead labeled it a “referendum” on President Barack Obama.

"The vice president said this election will be a choice. It will be a referendum, a referendum on the president and his performance," McConnell said Sunday on CNN's "State of the Union." "Their policies are in place and they are demonstrably not working."

Appearing earlier on the same program, Biden said voters in the next election will see a clear distinction between policies of Democrats and those of Republicans who, he said, are advocating for the same proposals that contributed to the economic decline.

However, McConnell said the White House is looking for someone to blame to score political points when, in his opinion, the current administration is culpable.

The lack of a public signing ceremony for the trade agreements that recently passed in Congress with bipartisan support was evidence, McConnell said, that the White House is "ashamed to mention any of the things that they do with Republicans because it steps on their storyline."

"Their storyline is that there must be some villain out there who's keeping this administration from succeeding," the Kentucky senator told CNN Chief Political Correspondent Candy Crowley.

On Thursday, the White House canceled a previously scheduled signing ceremony and remarks by the president but still allowed photographers to be present at the signings on Friday. A White House official said it "was simply a schedule change" and that the president has touted the passage of the agreements, including in Detroit the day after they passed.

The official also said the president's announcement on withdrawing U.S. troops from Iraq was added to his schedule Friday.