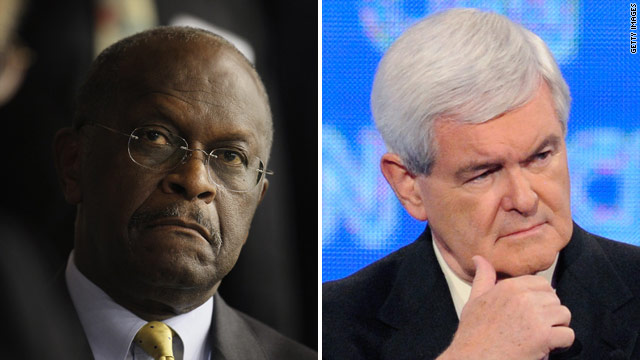 Cain and Gingrich to meet for tea party debate

(CNN) - Two 2012 hopefuls will go one-on-one in November at a debate sponsored by the Texas Tea Party Patriots, the group confirmed to CNN Monday.

Former House Speaker Newt Gingrich and former Godfather's Pizza executive Herman Cain will both participate in the event, which is slated to take place at a resort near Houston and will focus on fiscal issues.

Iowa Rep. Steve King will help moderate the event, which will take place Nov. 5. King is considered an influential Republican and a highly sought-after endorsement in Iowa, host of the first-in-the-nation presidential caucus.

Gingrich offered CNN some perspective about how the event came about following a campaign event in Davenport, Iowa.

"The tea parties in the Houston area called us and said – I think in Woodlands – said they'd love to get Herman [Cain] and me to talk in a dialogue, not a debate," Gingrich said. "And they wanted to use Paul Ryan's plan on Medicare and Medicaid and Social Security as a base. Then have us discuss each of us, our thoughts about it, how we'd do it, what we'd approach. So it should be very creative and very positive, I think. And Herman [Cain] and I – we were talking the other night at the Des Moines [Faith and Freedom Coalition] event that we're both looking forward to it because we think it'll be different."

Gingrich has been vocal in his desire for different kinds of debates than the ones currently featured in the presidential primary process. Speaking at the Iowa presidential forum sponsored by the Faith and Freedom Coalition Saturday, Gingrich said he'd challenge Obama to seven 'Lincoln-Douglas'-style debates.

The Lincoln-Douglas debates took place in 1858 and featured long philosophical discussions between Abraham Lincoln and his opponent Stephen Douglas.

Gingrich said the debates he was proposing would be three hours long, and feature a timekeeper but no moderator.