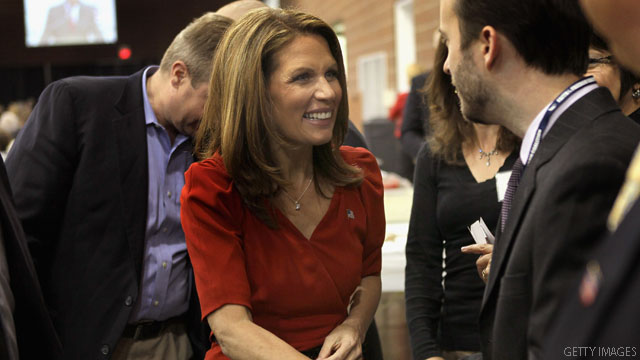 Concord, New Hampshire (CNN) - The former New Hampshire staff of Rep. Michele Bachmann - all five of whom resigned their posts last week - released a stinging statement Monday, accusing some of the congresswoman's national campaign staff of being "rude, unprofessional, dishonest, and at times cruel."

The open letter gives a lengthy and forceful critique of Bachmann's national staff, saying the team was not responsive to communications from New Hampshire, and had requested in September that New Hampshire staffers temporarily "go off payroll" then never clarified their employment status.

The statement also accuses the national team of being dogged by "chaos" and "shifting strategies" and treating the New Hampshire staffers as "second-class citizens."

"Sadly, they were deceived, constantly left out of the loop regarding key decisions, and relegated to second-class citizens within a campaign in which they were the original members," the statement said.

A former member of the staff confirmed the statement, released by the state account of "Team NH for Bachmann 2012," was crafted by the campaign's former New Hampshire staffers.

CNN attempted to contact members of Bachmann's national campaign for comment. There was no response to several emails, and the voice mailbox for Bachmann's press spokeswoman was full and not accepting messages.

"We have a great team in New Hampshire and we have not been notified that anyone is leaving the campaign," Nahigian said Friday.

Nahigian said Bachmann planned to return to New Hampshire to campaign, but acknowledged she would focus most of her energies on Iowa's first-in-the-nation caucus.

The statement by the former New Hampshire team said frustrations with the campaign had been building since June, but came to a head after Bachmann visited the state in early October. The letter does not divulge the reasons but calls them "serious" enough to prompt the state campaign manager Jeff Chidester to email his resignation to someone connected with the campaign.

"It saddens this team to see a dedicated patriot - a person so desperately needed in the White House - sequestered behind a wall of pretense, guarded by political operatives consumed by their own egos," the statement said.

Bachmann has been plagued by campaign staff upheaval both at her congressional office and on her campaign. Several key advisers left her campaign in early September.

But campaign staff hit back late Monday in a statement given to Politico.

"The unauthorized news release was sent by a person who doesn't even work for the campaign and has never had authority to speak on behalf of the campaign," said Bachmann campaign manager, Keith Nahigian. "We are not responding to comments made by a person who was not even a staff member in New Hampshire. Our focus is on Iowa."

Sununu set to back Romney