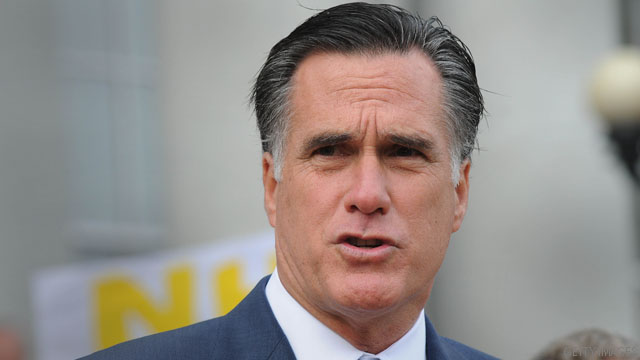 "Medical help for illegal immigrants could haunt Mitt Romney" reads the headline Monday's edition of the newspaper. The story details a program in the 2006 Massachusetts health care plan (which then Gov. Romney signed into law) called Health Safety Net, which allows undocumented illegal immigrants to obtain needed medical care along with other people in the state who lack insurance.

According to the Los Angeles Times, the program cost more than $400 million last year and paid for 1.1 million hospital and clinic visits, but it's not certain how many illegal immigrants received treatment since Massachusetts does not record such data.

The Romney campaign was quick to react to the article, and to criticize Democratic Gov. Deval Patrick, who succeeded Romney.

"Federal law requires emergency medical care for illegal immigrants. And if illegal immigrants are getting access to additional healthcare in Massachusetts, it's liberal Gov. Deval Patrick that has made it easier for them to do so. All of the regulatory activities involving the Health Safety Net Fund, including who could get care, were made long after Mitt Romney left office," said Romney spokesperson Andrea Saul.

In a statement, Patrick's spokesman said the law wasn't about immigration.

"The Health Safety Net fund, which was created by Massachusetts health care reform, reimburses hospitals and community health centers for medically necessary care provided to people unable to pay for it. It is not about immigration," Brendan Ryan said. "It is about good public policy and making access to health care universal for all members of our community."

The Massachusetts health care law, which critics dub as "Romneycare," has come under attack from Romney's rivals for the GOP nomination as the inspiration for the national health care law pushed by President Barack Obama and passed by a Democratic-controlled Congress, a measure that conservatives hope to repeal.

In last week's CNN/Western Republican presidential debate in Las Vegas, Nevada, Romney was also criticized by Texas Gov. Rick Perry over the issue of illegal immigration, when Perry brought back to life a story from the last presidential cycle, during Romney's first bid for the White House. In an angry exchange between the two candidates, Romney admitted that a landscaping company he hired years earlier for work on his Massachusetts home did employ illegal immigrants, but he said he fired the company when he found out.

The Romney campaign is defending the former governor's record on the issue, and criticizing Perry, who has come under attack by his rivals for the passage of a state law that gives in-state tuition at Texas colleges and universities to some children of illegal immigrants.

A couple of hours after the Romney campaign statement, the Perry campaign weighed in.