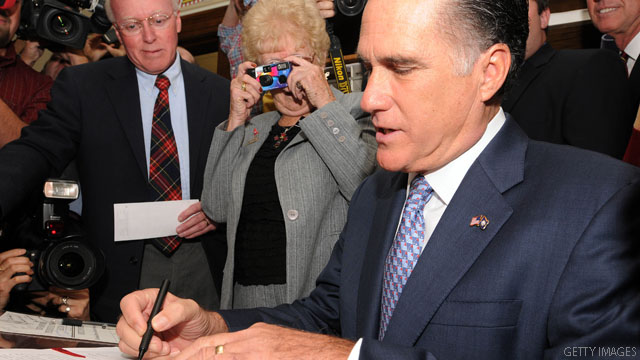 Concord, New Hampshire (CNN) - Greeted with elaborate fanfare and a hallway full of supporters, Mitt Romney filed for his candidacy in New Hampshire Monday, joking that "hopefully this time it will take."

After he filed, Romney proceeded into the chilly morning outside the Concord statehouse and spoke about patriotism. Behind him, about 100 supporters held blue Romney signs.

This was Romney's second event in the state in three days. He had been faulted by some in New Hampshire for continuing to campaign in Nevada while the two states were locked in a struggle over the GOP presidential primary calendar.

Nevada's GOP voted Saturday to push back its caucus into February, clearing a space for New Hampshire.