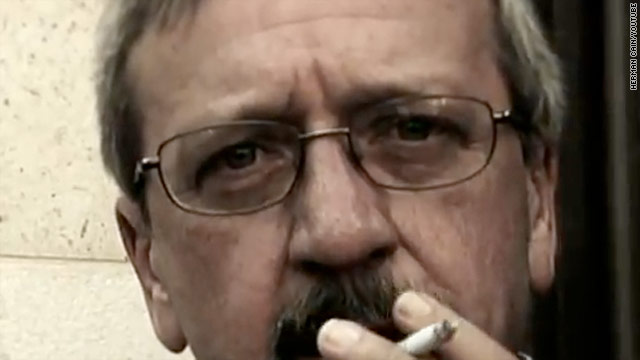 And Cain's chief-of-staff Mark Block told CNN he has no regrets over the spot that stirred controversy.

"America needs to get a sense of humor," Block told CNN Tuesday.

Block serves as chief-of-staff for Cain 2012 as well as chief operating officer of Friends of Herman Cain. He introduces himself in a closeup before extolling the attributes of the former CEO for Godfather's Pizza, who is seeking the 2012 GOP nomination for president.

But why did he include smoking in the video? "I smoke – it's a choice," Block said in an e-mail.

In the video, he speaks directly to the camera saying, "Tomorrow is one day closer to the White House. I really believe that Herman Cain will put 'united' back in the United States of America, and if I didn't believe that, I wouldn't be here," while shaking his head with conviction.

After describing Cain as a candidate that "America's never seen," he vows that with supporters' help, "we can take this country back."

Block singled out the campaign's motivation behind the ad saying his "Only intent was to speak to our supporters, about the campaign – smoking is just Block being Block."

Music swells in the background of the ad as a voice sings, "I am an American," and Block lifts a cigarette to his mouth, takes a drag, and exhales toward the camera.

It's a bizarre twist for the GOP frontrunner, who survived a bout with colon cancer, but not contradictory to his own views. As a lobbyist for the National Restaurant Association, Cain opposed bans on smoking.

The ad closes with a stonefaced Cain, who slowly breaks into a smile-a familiar parting shot of the candidate that also appears at the end of the "Who is Herman Cain" web ad featured on his campaign website.

CNN confirmed Monday that the web video was not a hoax. When asked if he has any regrets Tuesday, Block responded, "none."

A recent CNN/ORC International poll of the GOP presidential nomination placed Cain in second place with 18% support among Republicans and independents who lean Republican.