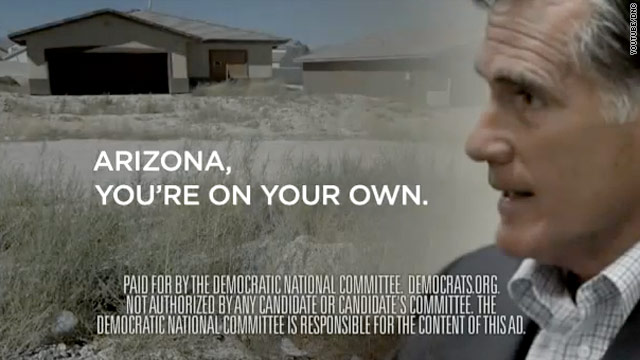 The ad, called "Underwater," uses comments the former Massachusetts governor and Republican presidential candidate made at an editorial board meeting with the Las Vegas Review-Journal earlier in October.

"As to what to do for the housing industry specifically, there are things that you can do to encourage housing," Romney said on Oct. 17. "One is, don't try to stop the foreclosure process. Let it run its course and hit the bottom. Allow investors to buy homes, put renters in them, fix the homes up and let it turn around and come back up."

The ad, produced and paid for by the Democratic National Committee, juxtaposes Romney's comments with images of foreclosed proprieties and a male narrator relaying facts about Arizona's housing market. The DNC says the spot will run for six days in Arizona on network and cable channels, including CNN.

In a statement, the DNC said the ad highlighted weaknesses that extend from Romney's background as a management consulting executive.

"Romney's position is appalling, but not unexpected from a former financial executive who wants to let Wall Street – the same guys whose recklessness crashed the housing market and our economy – write its own rules, even if it means hanging the middle-class out to dry," DNC Communications Director Brad Woodhouse said in a statement. "It is irresponsible, but not surprising coming from someone who made a fortune firing workers and sending their jobs overseas."

Romney's campaign was quick to respond to the DNC ad, saying it was President Obama whose record on foreclosures deserved more scrutiny.

"Under President Obama, American homeowners have dealt with falling home prices, rising foreclosure rates, and one of the worst housing markets in recorded history," Romney's spokesperson Andrea Saul said in a statement. "Twenty five million Americans are out of work, underemployed, or have just quit looking. President Obama and his campaign will continue to try and distract Americans from his disaster of an economic record over the next year but it's not going to work."

The release of the ad comes the day after Pres. Barack Obama outlined a plan to help troubled mortgage-holders refinance their homes. Obama announced the plan in neighboring Nevada, a state hit particularly hard by the housing downturn.

Arizona, where the ad will run, has been similarly affected by America's housing crisis. As the ad points out, the state had the nation's second highest rate for foreclosures in 2010, after Nevada.