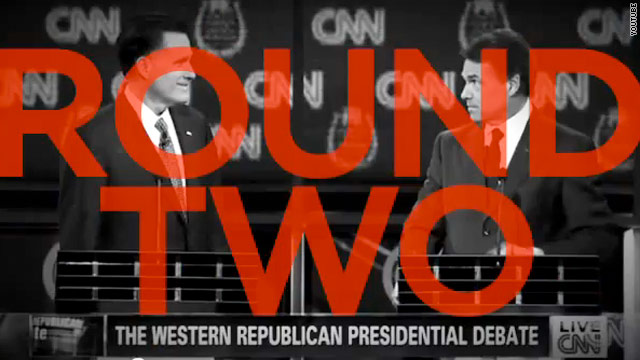 Coupled with dramatic music and special effects reminiscent of a professional wrestling match or a prize fight, the video aims to highlight what many described as a bickering spat between the former Massachusetts governor and the Texas governor over immigration.

As the video ends with an almost inaudible mix of Romney-Perry crosstalk, words appear juxtaposed over the screen: "They're right about one thing: Each other."

The video then switches to the song "Eye of the Tiger," showing a photo of Cain with the words: "There is a conservative choice. Herman Cain."

Over the last month, Cain has surged to the top to compete with Romney as front-runners in the race, while Perry has been sliding in the polls.

In the first national survey since last week's debate, Cain took top choice among likely Republican primary voters, according to a CBS/New York Times poll released Tuesday. Cain came in at 25%, while Romney received 21% of support. The difference fell within the sampling error.

The former Godfather's Pizza CEO isn't the first candidate to pounce on the simmering feud between Perry and Romney.

"I literally felt like, the other night, I was the recess monitor on the playground, watching these two kids," Gingrich said at an Iowa event.