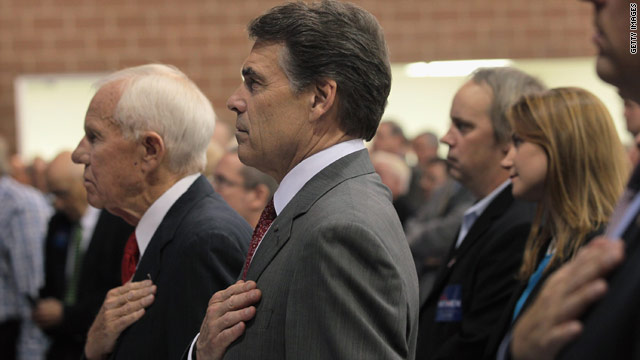 (CNN) - Rick Perry said Tuesday his plan of giving Americans a choice between their current income tax rate or a 20% flat-tax would "set our people free" from burdensome tax law.

"The size of the current code is more than 72,000 pages," Perry said to a crowd at a plastics company in South Carolina. "That's represented by this pallet right here and the reams of paper. That's what the current tax code looks like. The best representation of my plan is this postcard. This is the size of what we are talking about right here. Taxpayers will be able to fill this out and file their taxes on that."

Perry's proposal, which also lowers the corporate tax rate from 35% to 20% and eliminates the estate tax, includes provisions for taxpayers to maintain their deductions for mortgage interest and charitable donations. The standard deduction would increase to $12,500 for individuals and dependents.

The plan would also eliminate taxes on capital gains and dividends.

In his speech, Perry characterized his proposal as a jobs creation plan, saying the proposed reforms would encourage businesses to hire American workers.

"It is time to create incentives for American companies to invest in American workers," Perry said. "It is time to end the corporate loopholes, end the special tax breaks for special interests, end the gravy train for lobbyists and tax lawyers."

Perry also said he was committed to balancing the federal budget by 2020, saying reforms to entitlement spending and ending special interest payments would help close the cap between American spending and revenue.

He spelled out a number of specific proposals for Social Security, Medicare and Medicaid, including gradually increasing the retirement age and allowing state and ending wasteful spending and fraud.

Perry's flat-tax plan, the specifics of which first came to light Monday evening, has been drawing both praise and criticism.

"The belief that middle class Americans will benefit if we just give another special break to those at the top was long ago discredited which is why the President is fighting to create jobs now, restore economic security for the middle class and extend a tax cut that would give the typical middle class family $1500 per year," Ben LaBolt, Obama's campaign press secretary, said in a statement.

Businessman Steve Forbes, who himself proposed a flat-tax when he was running for president in 1996 and 2000, told CNN Tuesday the Perry plan was superior to Herman Cain's "9-9-9" tax plan, which proposes levying a flat 9% tax on income.

"The Perry plan is cleaner and just takes the existing code, starts over with a single rate, generous deductions," Forbes said. Forbes formally endorsed Perry on Monday. "And you're literally going to be able to do it on a single sheet of paper."

"The governor's plan is a very bold plan by way of comparison with anything else that's out there, and I think it is possible that it could achieve the growth of the American economy and the job creation that would follow that growth," Armey said. Armey is currently the chairman of FreedomWorks, a large conservative political group.