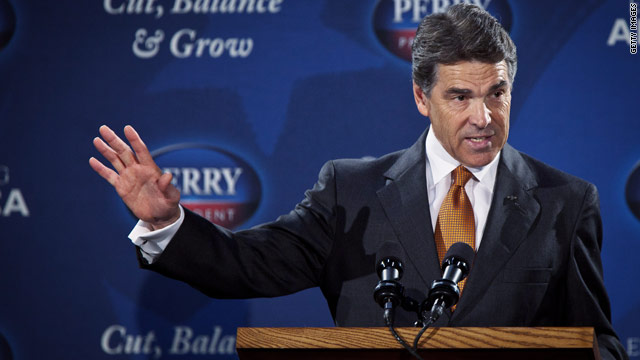 The Republican presidential contender made a point of weighing in on the issue after his rival, former Massachusetts Gov. Mitt Romney, visited Ohio and left questions about his position on an upcoming ballot measure that would overturn the anti-union legislation.

But the legislation, known as Senate Bill 5, is broadly unpopular in the perennial swing state and faces certain doom in referendum on Election Day, Nov. 8.

"As a true conservative, I stand with Gov. Kasich in promoting S.B.5 for fiscal responsibility and job creation in Ohio," Perry said in a statement to CNN. "Gov. Kasich and the Republican leadership of Ohio are to be commended for their efforts."

Added Perry, "My record as a pro-jobs governor is clear and you don't have to wonder where I stand."

Earlier in the day, Romney visited a Cincinnati-area phone bank run by the state Republican Party and rallied volunteers who have been urging Ohioans to vote yes on Issue 2, a ballot measure that would ratify S.B.5.

But Romney would not say specifically if he supports S.B.5, which Ohio voters oppose by a 57-32 margin, according to a Quinnipiac poll out Tuesday

Instead, he issued only generic support for GOP efforts to control spending in Columbus.

"I am not speaking about the particular ballot issues," Romney said, after being pressed by reporters. "Those are up to the people of Ohio. But I certainly support the efforts of the governor to reign in the scale of government. I am not terribly familiar with the two ballot initiatives. But I am certainly supportive of the Republican Party's efforts here."

Romney's vague statement quickly circulated around the web, chafing some conservatives who rallied behind Republican efforts in Wisconsin and Ohio earlier this year to limit union power.